BANGKOK — While contestants in Miss Universe Thailand are often look kreung or half-Thai – usually half-American or half-European – they are almost never from neighboring Myanmar.

Born to a Thai-Karen father and Burmese mother, Kansuda “Mimi” Chanakiri, 21, is the only half-Burmese contestant in recent memory to compete in the pageant. She goes head-to-head with 56 rivals in the awards ceremony this Saturday.

“When I was young, my friends would sometimes tease me for not speaking Thai clearly,” Mimi said. “But I started to teach them that ethnicity, religion, and other such factors should not divide people. The most important thing is building relationships and sharing your heart.”

“I was surprised that I was chosen [for the pageant]. I’m not pretty. People have told me that, so I was too afraid to compete at first,” Mimi said. “But this contest looks at both inner and outer beauty.”

Despite her reticence, Mimi snagged the “Golden Tiara” judges’ choice – while making judges cry and gaining viral fame – when she showed up at the audition in early June with a story of having traveled from rural Tak without any managers, sponsors, or even pageant clothes. She still doesn’t have a manager, or p’liang in Thai pageantry lingo.

“I rode various vans, with a big backpack of clothes, for eight hours. At times I cried because I didn’t know why I was doing this, or if I would make it,” she told us.

The third-year student at Chiang Mai Rajabhat University is majoring in Thai dance and showed off her rum (Thai dance) chops for us barefoot.

However, Mimi did retract some comments made during the audition about feeling sorry for the Rohingya in Myanmar.

“I really want to apologize for what I said. I didn’t really understand the problem deeply. I said what I said because I really felt sorry for them. But I just want everyone to get along peacefully,” she said, visibly stressed.

“They’re human like us, with hands and feet. But in Myanmar, they divide society up so much that this problem happens. I want Burma to realize that they are people and take care of them,” Mimi said in her audition. “Every nationality should be able to live and be happy together, just like how I’m happy living in Thailand.” 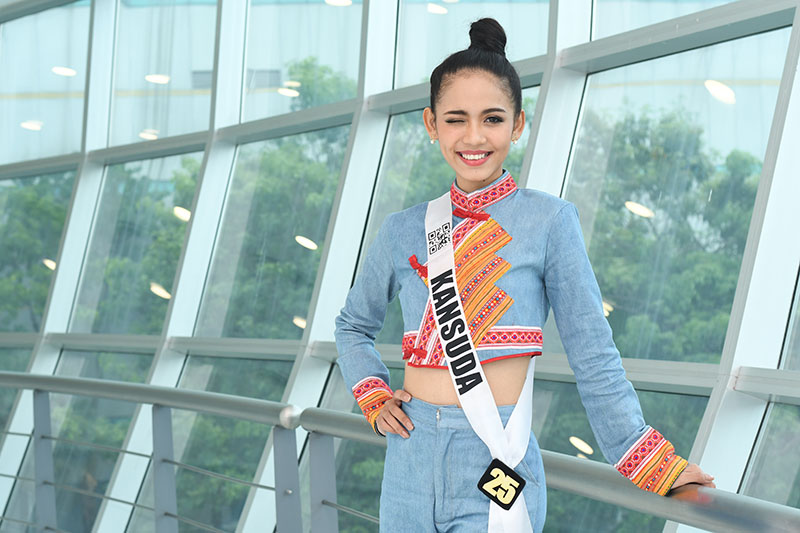