BANGKOK — Artists and art aficionados were relieved to learn an important space for thought-provoking art will reopen after renovations are completed in two years, though there was skepticism about what the future would bring.

The Art Center at Chulalongkorn University, which has served as a launching pad for many talents, recently opened what was to be its final exhibition with artists of different generations, backgrounds and nationalities.

The atmosphere was different from the usual festive joy as the opening signaled an end to the 22-year-old space, at least in its current form.

As the title suggests, the latest exhibition which ends Feb. 18, is to be the last before the venue closes. Farewell was to be the last show before it closed forever, but administrators earlier said it would reopen in two years, possibly in a different form.

The gallery has been in the red for years, and the atmosphere was muted at the Thursday opening on the seventh floor of the university’s Academic Resources Office.

“It’s high time to stop and reconsider whether to reopen it in the same concept or completely change its direction,” said Amorn Petsom, acting director of Academic Resources said. “The two-year closure will be the time to ponder that.”

Amorn said The Art Center has lost 2 million baht in the past six years. Its limited annual budget hasn’t covered the costs of supporting exhibiting artists.

“If we don’t adjust, there’s no way to survive,” Amorn said.

Those closest to The Art Center say its 380 square meters have offered a rare, university-sponsored venue for artists who want to push boundaries on social issues and sensitive questions.

While Chulalongkorn’s two other galleries are supported by the university’s Office of Art and Culture, The Art Center is operated by Academic Resources.

Though criticized for being hidden up on the seventh floor above the university library, The Art Center has launched several renowned artists since 1995 and is considered a progressive outpost on issues of society, culture and gender.

“Budgets are important but investing in art is also invaluable, more than what the university may think,” said Apinan Poshyananda, a Culture Ministry permanent secretary who was the center’s first chief curator.

“Having a solo exhibition here is a stepping stone in the art circle,” said Krit Ngamsom, a kinetic artist whose recent work “Time Machine” comprised photos of exhibitions being held at The Art Center inside a tank submarine.

Despite never studying at the university, 33-year-old artist Krit was familiar with the center since he was a student as his professors exhibited there. Now, an arts professor himself, things have come full circle with his students attending what is now his third exhibition there.

“This is not a commercial art space, it’s educational and doesn’t deduct anything from artists,” he said. Though regret for its upcoming closure, he hopes the center remains the same when it reopens in two years.

“It’s good if the change means upgrading the center, but I’m not that positive about the government sector,” he said. “They already got visionary people working, but bureaucracy might make things worse.”

With a mission to promote knowledge and create opportunities for artists, the nonprofit alternative gallery welcomes about 500 visitors a month, mostly artists and students from other universities. 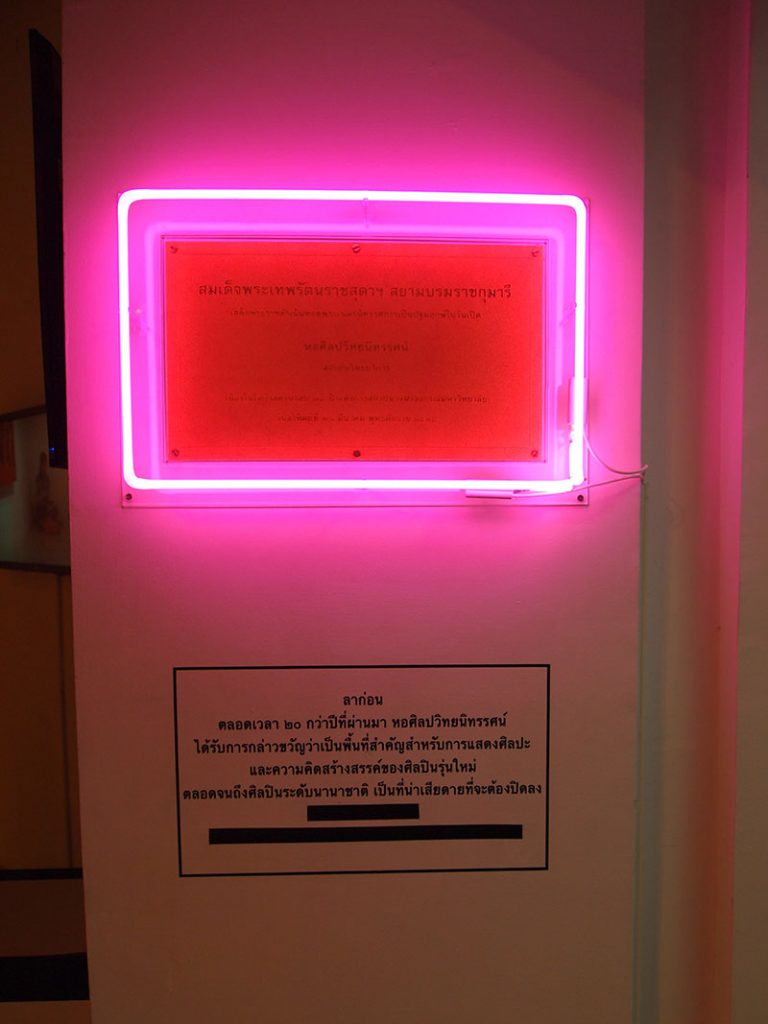