BANGKOK — You know something has become a brand when it becomes self-aware. Made By Legacy, that annual or sometimes bi-annual vintage flea market opened its 10th edition this weekend hawking memorabilia mostly in the form of pins, totes, T-shirts and hats.

That’s how Made By Legacy made and became comfortable with its cachet, if not fame, among Thai hipsters and their pretenders.

That’s not a bad thing in of itself. MBL’s 10th edition, which runs through Sunday midnight, has become well-known enough to attract a broader base. It must be noted that patina surfaces, real or faux, have been embraced by mainstream commercial design of furniture, wristwatches and clothing. That means accruing the kind of mass appeal and crowds that would drive away some of the early adopters.

Checking the place out on its opening evening Friday, nearly three years to the day since I first weighed in on its conceits, there fewer elite taste-makers and more upper-middle-class consumers and diners at the riverside Sermsuk Pier on the Thonburi side of town, near the Taksin Bridge.

Read: Made By Legacy Flea Market: Pretension or Desperation? (2016) The usual suspects are there selling vintage totes, linen jackets from the circa-1920s, second-hand cordovan shoes purveyed by Rugged Supply & Co. and century-old wet plate photography by Redlight Lab & Studio and much more.

It is not cheap. Used cordovan leather loafers by Alden or Allen Edmonds could set one back 10,000 baht, and the smallest retro photographs by Redlight start at 1,600 baht.

There are also hand-painted vintage WWII chinos by Vichit, which start at 6,000 baht.

Small leather-crafting brands such as Made by Me and Sew & Needle are also present selling wallets and the like. Food-wise, you have all manner of things described as “artisanal,” from hand-made steak burgers by American cooks and hand-cut fries by Frank Fries with Muay Thai spicy sauce (120 baht) to a cup of flat white by premium coffee purveyor Brava (110 baht).

The entrance fee of 100 baht ensures that people know nothing is cheap at Made by Legacy, though vintage hunters would say it’s worth the price of entry.

Not that many were dressed to the nines on Friday evening. The growing non-vintage crowd and me-too consumers also make the event feel less atmospheric that in earlier years. That may partly be due to Friday being a work day and one should expect a greater degree of panache this evening and tomorrow. The unique thing about a once- or twice-a-year vintage flea market is that it makes it a real happening. People know it’s only for a few nights and therefore an occasion to get dressed up to revel in.

For that alone, Bangkok should thank Made by Legacy for ensuring that once or twice a year, the city has something special to offer.

Made by Legacy runs 3pm to midnight today and Sunday. The Sermsuk Warehouse Pepsi Pier is a five-minute walk or short ride from BTS Krung Thon Buri’s exit No. 3. 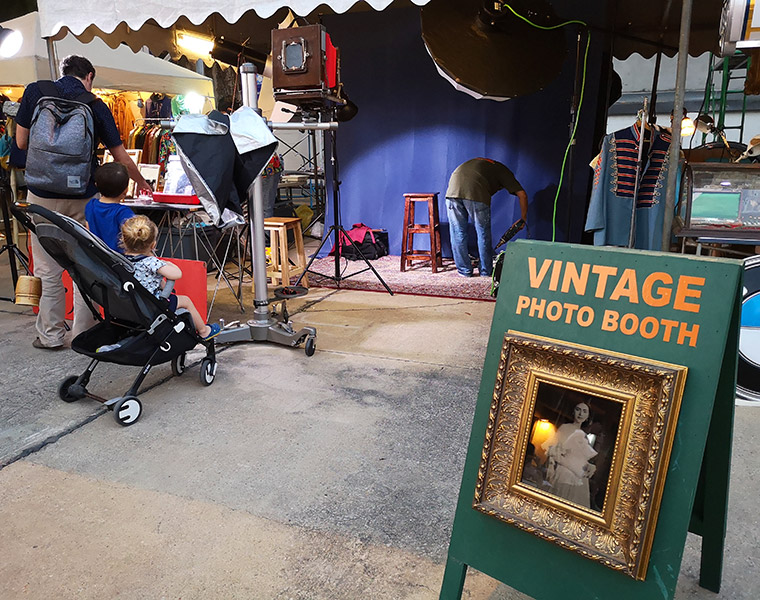