TRANG — A monk in the southern region caused an online sensation Tuesday when he announced that worshipers can make merits at his temple by ordering online delivery.

Phra Itthiyawathaya of Nikom Prateep Temple in Trang province said he understood the changing pace of modern life, which prevents many Buddhists from handing food and other offerings to the monks in person. The monk said the practice is also catching on in many temples.

“Many monks in city temples told me that they also received merit-making this way,” Phra Itthiyawathaya said. “Personally, I think it’s the trend of the [modern] time.”

The monk first drew attention when he posted on his Facebook that someone just delivered food to his temple via the popular FoodPanda application. He then dispensed blessings to the worshiper on a video call. 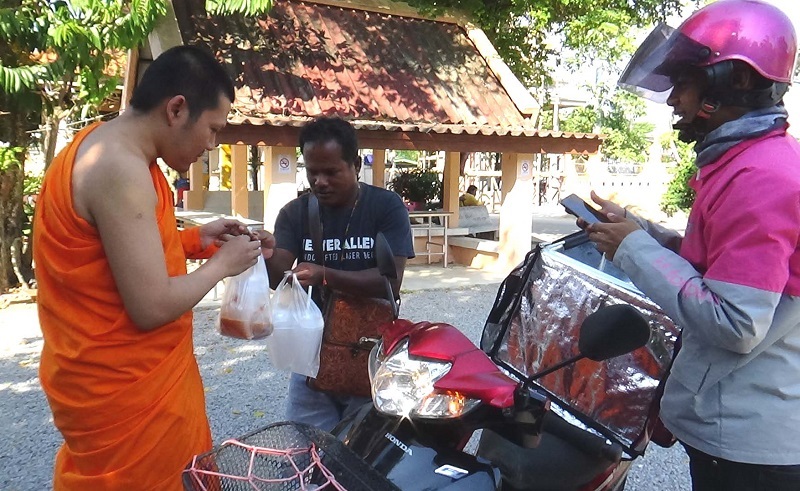 “The world is spinning fast, and dharma is also spinning in our heart. #Disruption,” Phra Itthiyawathaya wrote in a post that was soon widely shared on social media.

Presenting monks with gifts like food and other necessities – known locally as sangkhatan – is believed to result in good karma for the donors.

After some netizens debate whether a remote sangkhatan would still count as a karmic merit, Phra Itthiyawathaya confirmed that is the case. “The method may change, but the intent is the same,” he said.

Lamyong Thiengtham, a 63-year-old parishioner at the temple, said she also opted for online delivery services for her karma needs these days. Lamyong, who works in tourism business, said the new way of making merit suits her lifestyle because she doesn’t cook and has little time for shopping.

“Usually I like going to temples, but I thought this method is so convenient and new, so I wanted to try,” she said.

She added that delivery employees also told her they like sending food to the monks, because the monks often bless them upon receiving the donations.

But the new trend raised concern for some netizens that more people might simply stop going to temples altogether and only rely on delivery services for religious ceremonies.

Official statistics and observations by experts already show a decline in attendance and number of ordained monks in temples across Thailand in recent years.

When questioned about the concern, Phra Itthiyawathaya said the opposite might be true, because the convenience of online delivery may bond people closer to religion in their lives.

“I believe that people who gave these offerings, if they have time, they would still come to temples by themselves. They wouldn’t come less often,” the monk said. “Or they might even come more often, because they felt closer to monks. And their merit-making will make them feel peace in their heart. It will increase their faith.”

Online and mobile phone-based delivery services are a growing industry in Thailand. The business was estimated to be worth about 35 billion baht in mid-2019.