BANGKOK — A hotel spa relocated to a mall because the hotel is being demolished to make way for another mall may be the most Bangkokian location to treat yourself this holiday season.

Namm Spa, now on the second floor at Samyan Mitrtown, opened in September and are under the same operators as Dusit International’s Devarana Spa, which is reputed to be one of the most luxurious spas in the city.

The Dusit Thani Bangkok was closed in January, and its buildings are being torn down. Instead of its vintage 1970s facade, the hotel will be reopened as a mixed-use luxury hotel, condo, and mall. “We were afraid to lose some fans of the spa,” Nutthaya Rotthanaphaisan, the spa’s marketing manager said. “We use similar massage techniques as the Devarana Spa, but the prices are a bit lower since it’s in a mall setting rather than a hotel.”

The 90-minute Namm Signature Massage, for example, costs 2,808 baht (service and VAT included), but the same massage would cost around 3,500 at Devarana.

If doing an oil massage, customers get to choose from three oils whose scents make up for the uncreative names: “Chill” is of lotus and rose, “Fresh” is a mixture of eucalyptus and omega-3 fatty acids, and “Energize” is a tropical blend of oranges, kaffir lime, and cypress. We choose “Fresh” for our signature massage, and were greeted by our masseuse, O. We were led to our room to change and then O began to work her magic with the signature massage, which is a mix of Thai massage, Hawaiian lomi lomi, and Abhangya, an Ayuravedic oil massage.

What it really felt like was O working every single muscle meticulously, each oiled-up hand following the other, starting from our back, then legs and arms, before she finished off with a scalp massage.

“Is the pressure too much? Is the music too loud? Air con too cold?” she asked in a non-intrusive way, checking in often.

For hours afterward, our pores were smooth, scented, and moisturized to the brim. 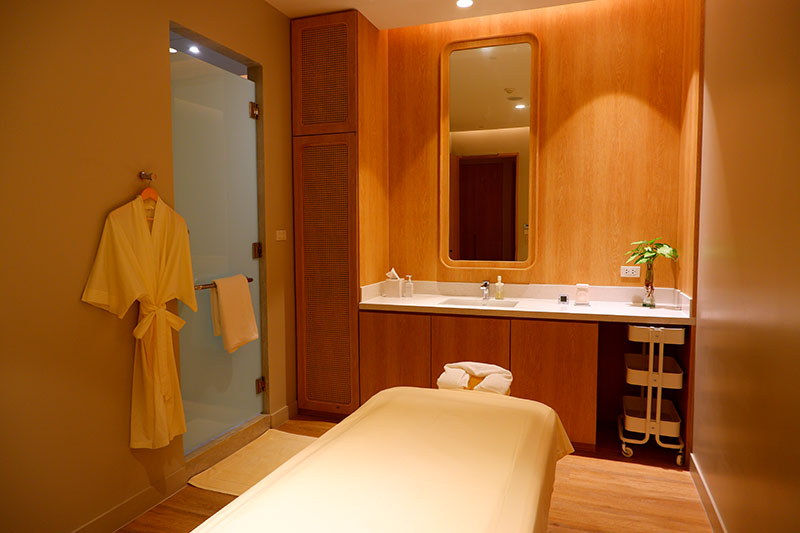 The Samyan Mitrtown branch is the only Namm Spa branch in Thailand, with the rest in Abu Dhabi, Dubai, Bhutan, and the Philippines. Devarana Spas are in Pattaya, Chiang Mai, Hua Hin, Manila, Nairobi, Guam, Conghua, and New Cairo.

Located on the second floor of the mall, the spa has six private rooms, one couples massage room with a bath, a Thai massage room, and a nail spa room. Unfortunately, the last room doesn’t shut out the mall.

Other treatments include the two-hour Samyan Market’s Charm (3,744 baht), which is similar to the signature massage but includes a brown sugar scrub (to evoke Thai desserts, apparently), body scrubs (1,755 baht), 700-baht baths, and 2,800-baht facials, and three-hour massages in the 5,000-baht range.

Namm Spa, open from 10am to 10pm every day, is located on the second floor of Samyan Mitrtown mall, reachable from MRT Sam Yan. Virtual Thailand: Check in to the Dusit Thani Hotel (VR)

Drawn-Out Goodbyes Made to Vanishing Bangkok