BANGKOK — A soda pop bottle. A naval officer’s cigarette case. A desk lamp owned by the second prime minister made from a iridescent shell.

These seemingly unrelated objects all share one feature. All are etched with symbols representing the birth of democracy. They’re also now on display at Revolutionary Things, an exhibition that opened Sunday at Cartel Artspace on the 86th anniversary of the Siamese Revolution.

They are some of the physical artifacts that were common in the 15 years from the end of absolute monarchy in 1932 through post-war Thailand in 1947 before the revolt began its slide into taboo subject.

“The revolution really touched on all aspects of common people’s everyday lives: art, architecture, music and objects,” said Kittima Chareeprasit, one of the curators. “It was really a trend, a fashion.” One of the most remarkable items is glass bottle mass produced in that era with a motif of the constitution. The most common symbol of democracy also found atop the Democracy Monument, it shows the document resting on an honor-bestowing tray.

Another object is a yellow earthenware cigarette box borrowed from the Artillery Center Museum. An ornate nautilus desk lamp etched with a map of modern Thailand owned by the second prime minister Phraya Phahonphonphayuhasena was loaned by a Phuket naval base. Even water bowls, earthen jars and ashtrays made from a shell were all stamped with the same democratic iconography that was common until it fell out of fashion. Democratic values, through these recurring symbols, are also reflected in religious imagery such as a 1937-era monk’s ceremonial seat from Wat Cherng Thai in Lopburi province, funerary architecture previously reserved for nobility and royalty at Wat Traimit and a relief of a muscular woman holding up the constitution at Wat Taling Chan in Bangkok. Look up to see a replica of a Loei temple’s ceiling mural of the national symbol of democracy.

“The artifacts here are not all from Bangkok, which shows that the ideological effect of the revolution spread through the provinces,” Kittima said. “People wanted to show through these symbols that they were with the worldly, modern times.”

Some of the pieces, such as high-contrast graphical illustrations, reflect the European fascist aesthetic imported by foreigners such as Corrado Feroci, the founder of Silpakorn University, who designed several famous monumental structures of the time. 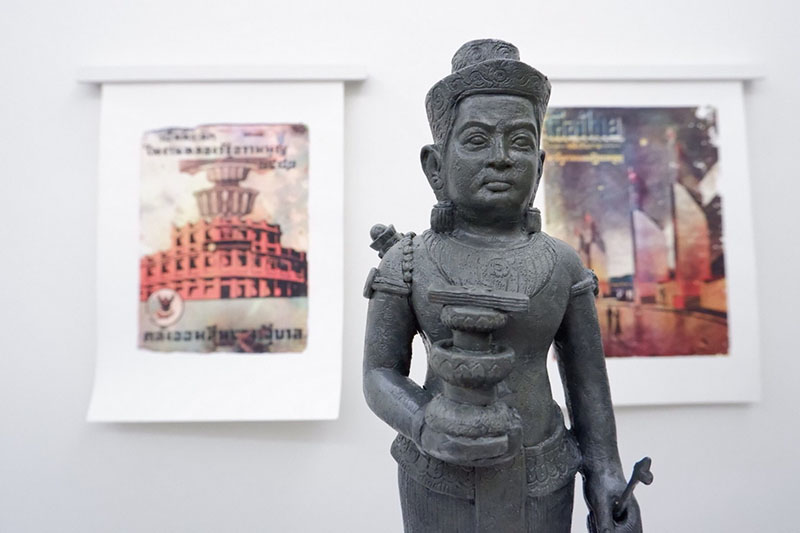 There is a reproduced statuette depicting Phraya Phahonphonphayuhasena, who led the People’s Party which staged the revolt and served as Thailand’s second prime minister. It shows Phraya holding the constitution and a sword with a symbol of the people on his back.

The era’s art also depicted what it meant to be a Siamese woman in changing times, especially under dictator Plaek, a fascist who passed laws forcing European-style modernization upon society.

A magazine called “Taharn Ying,” (Woman Soldier) has “woman” spelled according to the preferred sensibilities of Field Marshal Plaek.

A replica of the relief from a theater at a Lopburi military base shows a muscular, topless woman. A periodical called “Koo Mue Somros” (Marriage Manual) promoted modern ideals of monogamy to replace the widespread practice of polygamy. “Women then were really shown as being bro-upped,” Kittima said, using slang that means masculinized. “Their forms showed strength. They were shown as agents of the state who could help move the nation forward just as much as men.”

A companion card game is available for 350 baht at the exhibition. It plays like a Heads Up with a 1932 revolt theme. Hold a card (without looking at it) to your left breast while friends try to make you guess what’s pictured there. The rules call for a time limit of two minutes and four seconds in tribute to the People Party’s obsession with numbers and the revolution’s date.

The exhibition was one of few observances of the 86th birthday of Thai democracy. For the first time in decades, there was no candlelight vigil held at the commemorative plaque which was removed in April 2017. Elsewhere, there was a panel discussion about democracy held by Voice TV and a speech by the son of the army officer in charge of the coup.

The 1932 Siamese Revolution, which took place on June 24, 1932, brought an end to absolute monarchy and inspired a flourishing in the arts at the same time political change was wrought. Over the years, as the power of the monarchy was restored, the arts and media increasingly avoided the topic.

Why Was the 1932 Revolution Plaque So Important?