PRACHUAP KHIRI KHAN — Colorful fairy lights strung around a spirit house, an indoor faux rockery, and a waterfall mural – essential decor at any provincial Thai restaurant – also adorn one of the three Italian restaurants in all of Hua Hin approved by the Italian government themselves.

Da Mario pizzeria in Hua Hin is one of the 52 restaurants with the Ospitalia Italiana authenticity award in the entire country – and with its wonderfully tangy pizza bread and pappardelle, it’s easy to see why the humbly decorated restaurant is one of the only three Italian restaurants in the seaside town to win the accolade.

“I make it all myself from my family recipe by my mother and grandmother,” owner Cristian Uleri said by phone after our unannounced visit. “I win every year.” The Ospitalia Italiana, which announced its third edition in November, awarded a total of 52 restaurants out of the approximately 1,000 self-claiming Italian restaurants in Thailand. Inspectors from Italy’s National Institute of Research on Tourism visit and check for Italian restaurant authenticity, such as using Italian ingredients, kitchen layout, authentic menu items, and so on.

But on a visit to Da Mario, we noticed that pineapples – a no-no for most Italians – were in the cooking station by the pizza oven painted in the colors of the Italian flag. And the Tropicale pizza, a ham-and-pineapple pizza, was on the menu for 290 baht.

“Here we can adapt things if the customer asks, I make it,” Uleri said, when asked about the Hawaiian pizzas. “Italians don’t eat it with pineapple, but foreigners like Europeans, especially Scandinavians, do.”

Flanked by a much fancier, air-conditioned Italian restaurant, the humbler-looking Da Mario also has acceptable price ranges – appetizers in the 300 baht rage, bruschettas under 200 baht, salads under 300 baht, pasta from 200 baht to 480 baht, and pizzas from 230 to 390 baht. Meats and fish, however, are in the 700 baht range.

We were blown away by the Papparadelle dello Chef (420 baht), where generously thick strips of pasta were accented with surprisingly tangy beef fillet and sun dried tomatoes. Despite the white sauce, and because of the ricotta, the dish was anything but lian (overly greasy or creamy).

Just as memorable was the Gnocchi Quattro Formaggi (340 baht), a plate of tender potato pasta where each ball was softer than the last, the four cheeses never overwhelming. For a softness comparison, imagine the most bouncy bowls of Yaowaraj fish balls, but of light yet dense potatoes instead.

While outshined by the previous two dishes’ wow factor, the lasagna was standardly good, with a crispy cheese top, and served in a helpful hot plate that holds extra tomato sauce for the meat ragout within the layers.

Both pizzas we tried had a crispy-on-the-outside crust with a slightly tangy, doughy interior, which made us keep reaching for the next slice, even if the toppings weren’t overloaded.

The Quattro Stagioni was a crowd-pleaser of ham, mushrooms, artichokes, and salami, with a slightly odd choice of one green bell pepper and olive in the center. No matter, it was all gone in a few minutes.

Perhaps we were out-cheesed by the four-cheese gnocchi, but the four-cheese pizza was too heavy for our poor Thai stomachs to handle. Eight pieces of cheese-only pizza proved to be too rich, too intense – but props for anyone out there who can plow through this with no problem.

Owing to the easy-going, rather flexible view towards authenticity, Da Mario offered a bread basket served with powdered parmesan and olive oil with balsamic, which stricter Italians may declare a culinary sin. But perhaps everything’s more relaxed in Hua Hin.

Da Mario is open every day from noon to 10:30pm and is located on 20 Naresdamri Road in Hua Hin town, Prachuap Khiri Khan province.

This review is unsponsored and based on an unannounced visit to the restaurant. 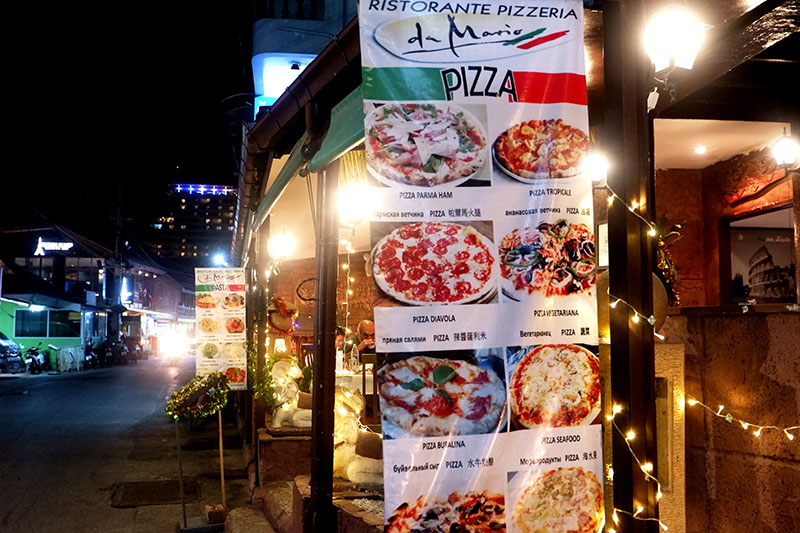 SURF’S UP! THE STANDARD, HUA HIN TO HOST “SPORTY AND SOAKED” – A VIBRANT SEAFRONT FESTIVAL AND SURFING MASTER CLASS