BANGKOK — A crane that fell on an all-girls school and injured 10 students in downtown Bangkok had been operating illegally for weeks, police said Thursday.

So far no one has been arrested for Wednesday’s incident at Assumption Convent School, which administrators said was far from the first time construction-related accidents have befallen the school. Bangrak police chief Duangchote Suwannajarat said the crane operator has fled the scene, but investigators will determine which company was responsible for the collapse.

“Six companies were involved in the construction. We will have to summon all of them,” Col. Duangchote said. One of the injured students was left with a fractured skull and remains in critical condition. 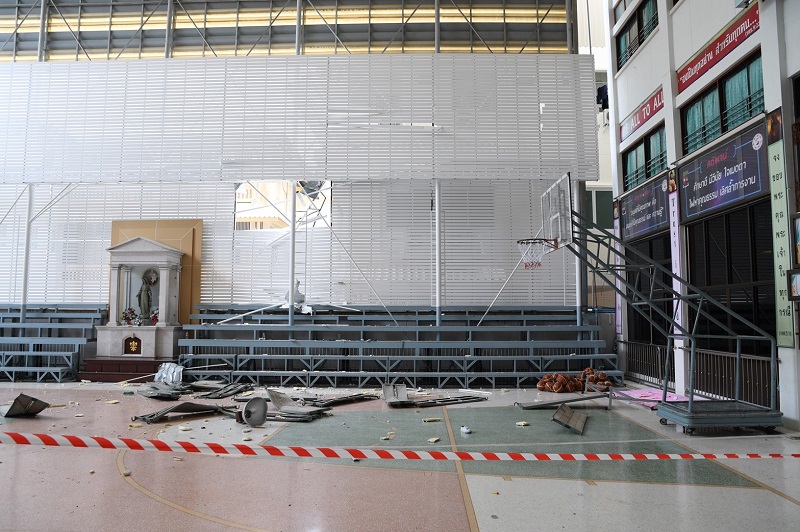 An administrator at Assumption Convent said it was the fifth time the school came under assault from debris and equipment from the construction site of River Garden Condominium, which is being unlawfully renovated into a hotel.

Assumption Cathedral deputy rector Winai Ritthiboonchai said the church complained to the district office in the wake of previous accidents, but no action was taken.

“The officials said if no one was injured or killed, it shouldn’t be a big deal,” Winai said. “It really upsets me, because the accident happened in an area where with a church and students.”

He continued, “I didn’t want any tragedy to befall my students. But in the end, an accident did happen and injured many students.”

Although Bangrak District Office ordered construction to halt on April 1, works continued at the 17-storey building anyway, Duangchote said. The district office only filed a complaint to police over the violation yesterday – several hours after the accident. Asked how the officials failed to spot and report unlicensed construction on such a massive scale for weeks, Duangchote said, “I don’t know how they inspected the site. The district chief said she already inspected the site but found no violation.”

“Maybe works only took place at night when officials were away? That’s just my speculation,” the officer added.

The construction site is located just steps away from the luxury Mandarin Oriental Hotel, the Catholic Church’s headquarters in Thailand, and a riverpier busy with foreign tourists.

Col. Duangchote has named Puttatecha Ltd. as the project’s leading firm. Representatives from Puttatecha must meet with police by tomorrow or be slapped with summons warrants, he said.

When reached for comment, Bangrak district deputy chief Sinchai Boonpak referred all inquiries to his supervisor, district chief Pakkaporn Sa-nguansak. Pakkaporn could not be reached for comment as of press time. Phone calls to contact numbers listed by Puttatecha Ltd. also went unanswered. Speaking to reporters yesterday, Gov. Aswin Kwanmuang pledged to take all possible legal actions against the construction firms. He also said an official in charge of construction permits at Bangrak District Office has been suspended in light of the accident

“I have reiterated to the district office director not to let any work continue in that building,” Aswin said.

The Assumption Convent School was shut down today while police collected evidence and assessed damages.

Crane collapses and other hazards have become common as the city races to erect skyscrapers, hotels and condominiums. Safety advocates say there is little or no oversight from local authorities, and legal action against violators moves at a snail’s pace.

Five people were killed when a crane collapsed at a condominium construction site on Rama III Road in January. Three people were also injured in a similar incident in Silom district a month earlier.