Editor’s note: Khaosod English senior staff writer Pravit Rojanaphruk was on holiday in Paris last week and brings his account of the massive anti-government protests which have disrupted the capital.

PARIS — Less than 10 hours had passed since the so-called yellow vests marched down Paris’ Champ-Elysees Avenue. As I crossed the Alexandre III Bridge toward the avenue at dawn on Sunday, two dozen police vans filled with anti-riot police were still camped outside the Grand Palais and Petit Palais – just in case.

What was clear was that shops along the Champs-Elysees were determined to resume business as usual as quickly as possible that morning despite the estimated 10,000 protesters who had angrily descended onto the avenue for the third time the day before to demand better standards of living and express outrage at what they perceive as “President for the Rich” Emmanuel Macron’s fuel tax and more.

Many shops were well-prepared and had boarded up their front display windows. Most impressive were Omega and Louis Vuitton’s Flagship store on the avenue.

Rolex may be known for its virtually indestructible oyster watch case, but at the Omega shop, unlike the avenue’s other luxury good purveyors, had installed a solid steel board to keep its windows from being destroyed and watches snatched.

At the Louis Vuitton flagship store, just a short stroll from Paris’ equally iconic 50-meter Arc de Triomphe, commissioned in 1806 to celebrate Napoleon’s victories, managed to outdo even Omega’s. Its storefronts had sturdy metal mesh installed to prevent protesters from smashing the glass while still able to tempting passers-by to window shop.

By 8:30am, some workers were already removing the wooden boards in order to return to normal after a lost Saturday. Some workers were scrubbing vile graffiti against Macron from the beautiful stone buildings lining the avenue, which originated in 1667 for the Sun King, Louis XIV, and came to be as it is today over a century and a half ago in the 1830s.

A French TV reporter grabbed me to ask on camera what I thought. I said it’s unfortunate that some protesters resorted to vandalism which will not endear them to the general public, but hoped the French people could find a peaceful end to the conflict.

Off the camera, I asked the male French reporter how it would end. He didn’t know.

What’s apparent to me is the resilience of Parisienne shops along the Champ Elysees are intent on getting back on their feet, particularly with Christmas just around the corner.

True enough, by 9am, hordes of Chinese visitors were pouring from buses onto the avenue to take pictures and selfies before the Arc de Triomphe, despite the smashed window of a still-closed cafe with a sign in French stating: “Continuous Service.”

One day, the images of protests and vandalism could make for good postcards for sale at some of the souvenir shops along the avenue itself.

Some may say the fast-food restaurants, the pricey car dealerships and big movie complexes as well as the hordes of rowdy Asian tourists are doing more damage to Champs-Elysees than the protesters ever could – but that’s up for debate. 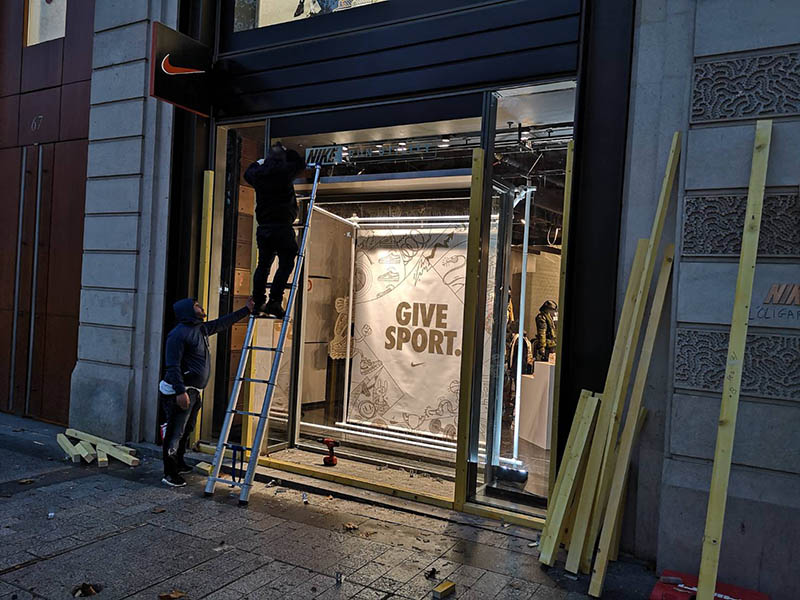