Just as worrying as the recent and second attack on anti-junta activist Sirawith “Ja New” Seritiwat is the gratification that has been expressed by some junta supporters.

Despite the junta’s claims that it restored peace and order after the May 2014 coup, political hatred continues to fester on both sides of the political divide. Political hatred is eating up the hearts of many Thais, reducing them to beings that derive gratification from the suffering of those with whom they disagree politically.

The dilemma facing Thais on both sides of the political divide is: will you choose to fight for your vision of an ideal society with love or hatred?

Some have chosen hatred and are very vocal about their choice.

“Good news,” wrote Facebook user Sirirat Panumas on Friday, along with a photo of Sirawith lying unconscious after four men attacked him with wooden clubs near his home in Bangkok last Friday, leaving him unconscious with a broken nose, fractured right eye socket, and blood flowing from his white shirt.

“May I advise that his mother muzzle his mouth so he won’t have to be attacked again,” wrote Facebook user Sirirat Panumas.

“When will it be these two’s turn?” asked Facebook user Akkarawat Pon Jirawatthanakul, along with photos of two well-known anti-junta student activists, Netiwit Chotiphatphaisal and Parit Chiwarak, and seven laughing emojis. 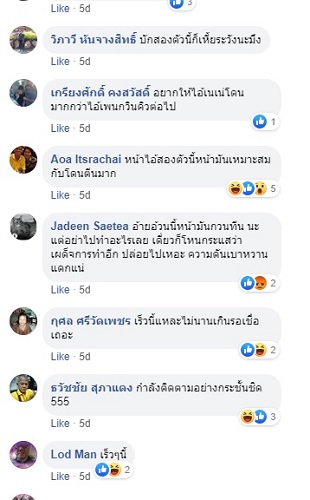 Top: Junta supporters on a Facebook thread saying they hope two other activists will be assaulted like Sirawith.

When I tweeted about the attack, Twitter user @guantanamo___ asked in response when my turn will come too, followed by 50 in-tears-laughing emojis.

So far, no one has been arrested for Ja New’s beating. In any case, it’s clear that the problem is larger than the attacks on three anti-junta activists in recent weeks. The public and shameless expressions of schadenfreude that have followed are very alarming.

Rather than hatred for those who disagree politically, there is another path that Thais can take, which is to fight for their vision of an ideal society with love – be it for justice, freedom, democracy, equality or whatever else.

Political hatred corrodes one’s humanity. It also corrodes the humanity of others. Once you start hating your political opponents, you start to see them as less than human.

Although I have been detained without charge and made to undergo “attitude adjustment”, and continue to face sedition charges for criticizing the junta, I have never harbored political hatred in my heart.

I write out of love for freedom, truth, justice, democracy and equality, not out of hatred for junta leader Gen Prayuth Chan-ocha or the uniformed men who detained me.

This is a personal choice, however. Some think Thais are not angry enough, and cite this as the reason the junta has remained in power, introduced a less-than-democratic constitution and got away with a sham election.

On Monday, Prayuth still had the audacity to make a thinly-veiled threat to stage another coup if all doesn’t go well with the formation of his cabinet.

But won’t political anger lead to political hatred? The question reminds me of a European diplomat who last week compared Bangkok’s traffic woes to that of Cairo’s, observing that Egyptians have a very low tolerance for waiting while Bangkokians simply watch the traffic light calmly and passively.

Opinion: The Poor Are Getting Poorer and That’s a Ticking Time Bomb

Opinion: Was the Temporary Suspension of PM Prayut, Good News, Bad News, Or a Sick Joke?

Opinion: Prayut Can Spare Thailand from Further Pain and Political Impasse by Calling for Snap Election