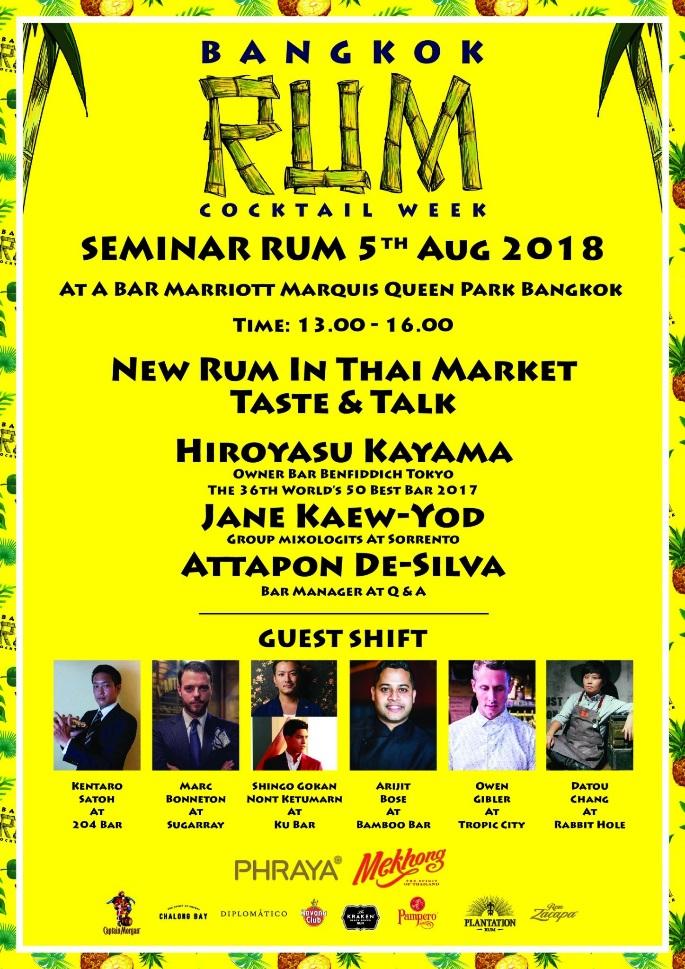 Kin + One Co., Ltd. is treating rum lovers to a new drinking phenomenon at the Bangkok Rum Cocktail Week 2018, a week of knowledge and enjoyment. The goal is to keep rum lovers pleased and sated with great drinks, lift the standards of Bangkok’s bar scene and add color and excitement to the local cocktail world.

The cocktail week is a gathering of rum producers, entrepreneurs, mixologist, business owners and consumers that seeks to promote an open exchange of knowledge, information and experiences in a chilled-out atmosphere.

High on the agenda of the cocktail week is a series of seminars that brings together a multitude of speakers including rum experts and guest mixologists from Thailand and across the world. They will be on hand to share knowledge, ideas, experiences and techniques in mixing up great tasting cocktails. Other activities include tasting sessions to introduce a range of rums such as white rum, gold rum, aged rum, flavor rum, spiced rum and local rum.

Newly concocted original rum cocktails will be served at 37th-floor Abar of the Bangkok Marriott Marquis Queen’s Park from July 31 to August 5, 13.00-16.00.

Up to 34 guest bartenders from across the world will stage cocktail-mixing demonstrations in which special-recipe drinks with a rum base will be concocted for tasting. The guest bartenders will be on hand at Bangkok’s top 26 bars.

The program is as follows:

Part 1: A talk by rum expert Fabrice Lee Guitteaud on the origins, history, production of rum, lands of rum and other interesting facts about rum.

Part 2: Natalie Lau, Manager of The Old Man bar (ranked among the top 5 of the 50 Best Bars in Asia rankings) and a former team member of The American Bar at the Savoy Hotel in London, will share her cocktail experiences and unveil her techniques of mixing up and creating drinks.

Part 3: Three well-known Thai bartenders will be on hand to create rum activities.  Ronnaporn Kanivichaporn will stage a bartending performance. Natakorn Changrew will create a cocktail with a rum base using organic Thai ingredients.  Nik Anuman. Ronnaporn will create a special rum cocktail for tasting.

Guest shifts on July 31 are as follows:

Sim Szw Wei of Bunker under the Mekhong brand

Lorenzo Antinor of Vogue Lounge under the Havana Club brand

Paolo De Venuto of Sorrento under the Havana Club brand

Samuel Kwok of Dag under the Havana Club brand

Part 4: This part titled “Thai Bartender” (60min) has two famous bartenders – Jamie Rhind and Supawit Muttarattana – on hand in tasting sessions in which they will share experiences, ideas and techniques and create special cocktails.

Nico de Soto of Abar under the Ron Zacapa brand

Natalie Lau of Q&A under the Phraya Rum brand

Andreas Sanidiotis of Sorrento under the Kraken Rum brand

Hideyuki Saito of Baan Suriyasai under the Mekhong brand

Part 2: A talk on “What’s Dark and Spiced Rum?” is followed by a tasting of dark and spiced rum (Mekhong, Captain Morgan, Kraken) led by David Codoba (45min). Then, a Mekhong talk by Mekhong’s representative Suwincha  Singsuwan.

Philip Bischoff of Abar under the Mekhong brand

Aki Wang of Rabbit Hole under the Mekhong brand

Charlie Ainsbury of Backstage under the Ron Zacapa brand

Part 1: A talk on “What is White Rum?” followed by a white rum tasting (Havana, Diplomatico, and Pampero) led by David Cordoba (45min).

Part 5:  Two well-known local bartenders – Sebastian De La Cruz and Suwan Silee – will join a talk in which they will share their cocktail experiences and ideas before creating special cocktails with white rum for tasting (60min).

David Cordoba of Vesper of the Phraya Rum brand

Dinos Constantinides of Bamboo Bar of the Phraya Rum brand

Mari Kamata of EAT ME of the Phraya Rum brand

Suman Gurang of Zuma of the Diplomatico brand

Part 2:  A talk on the production of the  Chalongbay brand from Phuket (30min).

Part 4: A talk on rum experiences plus a tasting of cocktails by famous Thai bartender Kitibordee Chortubtim (30 min).

Nicolas Saint-Jean of The Penthouse of the Diplomatico brand

Koji Esashi of Octave Rooftop Bar of the Diplomatico brand

Sullivan Doh of Rabbit Hole of the Chalong Bay brand

Hiroyasu Kayama of Thaipioka of the Mekhong brand

Diego Ferrari of #Findthelockerroom of the Phraya Rum brand

Valentin Iulian of Backstage of the Kraken Rum brand

Part 2: A talk on rum experiences and techniques by Kayama Hiroyasu, the owner of Bar Benfiddich in Tokyo, which was ranked 36th in The World’s 50 Best Bars 2017 list (45min). Hiroyasu will also create drinks for tasting.

Part 3:  Well-known Thai bartenders Jane Kaew-Yod and Attapon De-silva will be on hand to talk about their rum experiences before creating rum-based cocktails (60min).

Kentaro Satoh of 204 Bar of the LAODI Rum brand

Marc Bonneton of Sugarray of the Diplomatico brand

Arijit Bose of Bamboo Bar of the Plantation brand

During the Bangkok Rum Cocktail Week 2018, there will be a nightly presentation of special-recipe cocktails by guest bartenders from 4 to 5 bars that continues until all bartenders from the 25 complete their turn during July31-August 5, 20.00-24.00. The Rum Wild Out party will take place on August 6 at the Bangkok Marriott Marquis Queen’s Park’s fifth-floor Salathai Room. At the party, there will be an award presentation ceremony to bestow the following awards: Top 3 Rum Cocktail in Menu, The Ultimate Vote By Bartender, Top 5 Bartender In Bangkok, The Best Rum Brand to Support Industry.

All rum lovers are welcome to explore a new rum experience at the Bangkok Rum Cocktail Week 2018 from July 31 to August 6. For further details about the event and how to take part in activities, visit https://web.facebook.com/BangkokRumCocktailWeek/.