BANGKOK — At Roots Coffee, they don’t just serve Thai single-origin drip coffee. They have postcards for you to write to the farmers as well.

Wondering if it was just a marketing gimmick and whether the cards really get to the farmers or not, I asked Witsawawit Chantaweesomboon, a manager and barista at Roots at Sathorn earlier this week.

He quickly produced a pack of written postcards and said they will definitely be delivered to the farmers, whose photos adorn the one-year-old coffee shop.

“If it’s in English, we will translate it for the farmers as well,” Witsawawit said. Customers can choose to send postcards to three different farmers, and I checked out the ones that will be sent to Nawin and Tina, which the card said are third-generation coffee farmers who also run a processing mill, a roaster, and a café in Mae Suay, Chiang Mai.

The cards and texts at the Sathorn branch are printed in English, which speaks volumes about the target clientele of the coffee house. The Sathorn branch, open since June 2018, is the larger of the two and (soon to be three) branches. The other is at hip Thonglor community mall The Commons.

“We find their willingness to learn and their drive to build a better reputation for the coffee from this region very inspiring. They pay great attention to the coffee trees and go to great lengths to ensure that the trees are covered with enough shades,” the text went on. A look at their website shows multiple aesthetic pages dedicated to profiling their supplying farmers.

Roots is not fair trade, but Witsawawit said the company ensures that the farmers get their fair share. So for each cup of a hundred baht coffee, five per cent of the profits goes back to the dozen or so farmers. In case of Nawin and Tina, the manager said Roots eventually assisted them in constructing a coffee bean drying room instead of handing out the additional cash, and one can see the photos at the shop’s walls.

“We think of them as not just business partners but friends,” the barista-manager explained. I drank a satisfying Americano made from Nawin and Tina beans (100 baht). Here at Roots, customers consume not just expensive coffee but stories and faces of the farmers too.

“To Roots Coffee Farmers, Thank you so much for the love and care you give to your beans,” reads one of the customer-written postcards. “I take them home to Tokyo, grind a small amount as soon as I wake up every morning, then starts my day enjoying a taste of Thailand. I love it. Thank you.” I couldn’t decipher the name of the Tokyo-based consumer.

While chatting with the barista, Witsawawit insisted I try the lighter roasted Nawin and Tina drip or “pour over” coffee as well and he made one for me (120 baht). Lighter beans for drip coffee is more aromatic, not unlike enjoying quality tea. 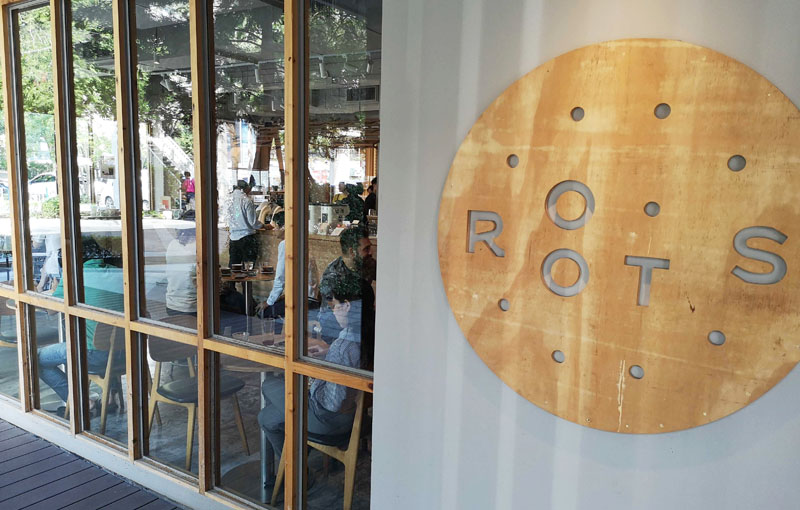 There’s a slightly herbal and earthy nose, as well as a lighter, more acidic taste compared to the darker, caramelized roast of the same beans used for an espresso or Americano.

The beans, which is shade-dried was described by the shop as “complex, honey finish”. Complex it was, though I wasn’t sure if I missed the honey part.

Witsawawit said single-origin drip coffee has exploded into the Thai urban palate over the past half a decade and he reckoned there are at least 1,000 specialty coffee shops in Bangkok and beyond. Roots is a place for discerning Bangkokians with adequate disposable income, who may have been hooked to Starbucks (aka the second wave of coffee drinking after that of the dreadful instant coffee) and moved onto a more socially responsible way to consume: third-wave single-origin drip coffee. And there is no going back despite the relative high price.

Witsawawit said Thai coffee farmers are doing relatively fine in the market, as imported beans are slapped with a 100 percent tariff. He is not sure what will become of Thai single-origin, which is grown almost exclusively at an elevation of 800 meters or higher in northern Thailand if imported beans will no longer be taxed due to some FTAs.

While he admitted that that some of the world’s best coffee beans from abroad are still more complex than Thailand’s locally grown ones, Witsawawit is hopeful that Thai beans can improve.

“We want Thais to enjoy specialty coffee. We see potential in Thai coffee and we are no inferior compared to those from elsewhere,” the barista said.

Roots at Sathorn opens every day from 8am to 7.30pm and is close to Exit 4 of BTS Surasak Station. Call 082-091-6175 for details. Note: The writer paid for the coffee and dessert by himself.