BANGKOK — Weather conditions and vehicle emissions are being blamed for the return of smoggy skies over the capital.

As of Monday morning, Bangkok’s air pollution had risen to unhealthy levels, according to independent measurements. The Pollution Control Department said the level of ultrafine particles in 36 areas across the metropolitan area exceeds acceptable levels.

Citing information from the Meteorological Department, officials said the increased pollution was due to higher temperatures, a lack of wind and the return to traffic as usual following the long New Year’s holiday.

They encouraged people to use public transportation, discontinue use of older vehicles and refrain from setting fires in open spaces.

According to the international Air Quality Index, Bangkok’s pollution ranked 164 as of 10am, well within its range of unhealthy air that people should avoid prolonged exposure to. Over two weeks ago, it ranked Bangkok’s higher at 184. City Hall has announced a few active attempts to remedy the situation, including spraying water in areas where the smog is heaviest. 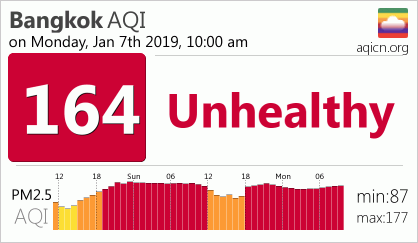