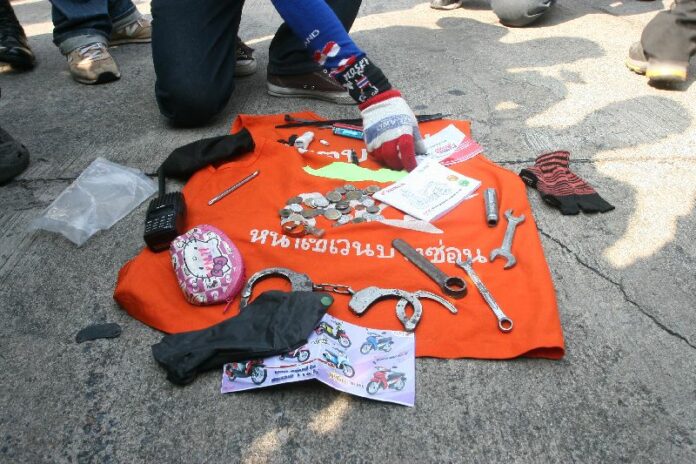 (28 January) A policeman was brutally beaten by anti-government protesters after they mistook him as a hostile gunman, a governmental body has claimed.

The chaos broke out today when the protesters were besieging Army Club on Vibhavadi-Rangsit Road, where Prime Minister Yingluck Shinawatra and her Cabinet members were appointed to meet with Election Commission (EC) officials for discussion.
The protesters, who were led by the People′s Committee for Absolute Democracy With the King As Head of State (PCAD), have threatened to storm into the venue and apprehended Ms. Yingluck along with her entire Cabinet.
Police officers and soldiers, backed by concrete barricades and other reinforcements, guarded the entrance to the Army Club. The situation became markedly tense when protesters broke through the front gate, and slowly approached the police line.
Just then, a gunshot was heard from other side of the multiple-lane Vibhavadi Road. A large group of protesters immediately ran to investigate the source, while others ran for cover in panic.
What happened next is extremely hazy, our correspondent said. A shout went up among the protesters that the gunman had been apprehended at a soi opposite the Army Club, a number of individuals injured by the gunshots has been reported.
PCAD guards also claimed to have found some evidences in the area, such as a motorcycle allegedly driven by the gunman, a motorcycle taxi jacket, a pair of handcuffs, and a magazine of 11 mm. handgun.
It later emerged that the assailant has been mobbed by the protesters and transported to hospital. The injured protesters were likewise sent to hospital, but it is not immediately clear how many have been wounded by the gunfire.
Police officers, distrusted by the protesters, were not allowed to inspect the crime scene, and the evidences reportedly found at the scene were handed to military personnel who were assisting the protesters instead.
The Center for Maintaining Peace and Order (CMPO) later released a statement claiming that the alleged gunman apprehended and assaulted by PCAD protesters was in fact a police detective officer who had been placed among the protesters for intelligence gathering.
According to the statement released by CMPO, the policeman was falsely accused of shooting at the protesters and assaulted by the nearby protesters, who also allegedly attempted to seize his sidearm. The officer reportedly tried to flee the scene, only to be mobbed by more anti-government protesters.
CMPO described the officer′s injuries as "severe".
The claim cannot be independently verified at the moment; both governmental officials and anti-government leaders have accused each other of deploying provocateurs to stage numerous violent incidents in the past weeks.
Meanwhile, PCAD spokesman, Mr. Ekkanat Prompan, accused the police force of conspiring with individuals who attacked one of the protesters′ convoy at Wat Sri Eiam Temple on 26 January. A PCAD prominent leader was also shot to death during the clashes.
Mr. Ekkanat also demanded that the police step up their investigation on other cases of violence against the protesters, such as the grenade attack on PCAD rally at Victory Monument on 19 January, and alleged that the police are deliberately slow in their effort to locate the suspects.
"If the police still do nothing, it would demonstrate that the RTP is related to these incidents," Mr. Ekkanat said, referring to the Royal Thai Police.
Furthermore, Mr. Ekkanat criticised the police force for planting undercover police officers who "behaved suspiciously" in their protest sites.
"In many incidents, the police infiltrated into the protests and behaved suspiciously," Mr. Ekkanat said, "But when an incident occurred, they would always blame a third hand party".