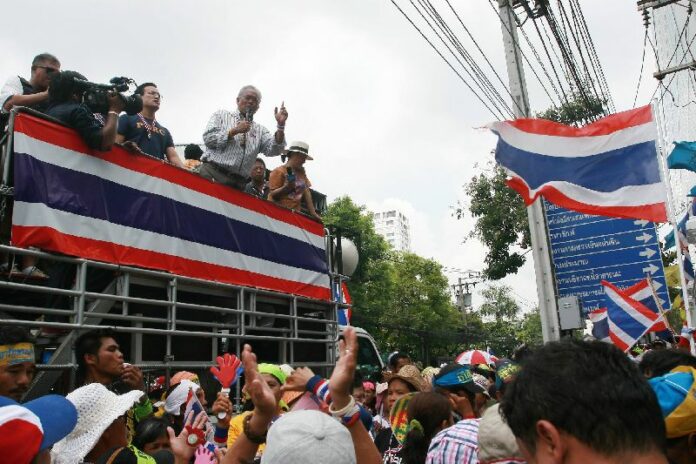 (2 April) The Commander-in-Chief of the Royal Thai Army has suggested that an unspecified "special way" might be needed to end the current political turmoil.

Gen. Prayuth Chan-Ocha made the comment after meeting with Gen. Thanasak Patimaprakorn, Chief of the Defence Force, at the 1st Infantry Division in Bangkok this morning.

"Every Thai must return to be an order-loving Thai, not a do-whatever-I-want Thai," Gen. Prayuth said, offering advice to anti- and pro-government protesters alike, "Today we have to be a nation of  Thais who have order, respect the laws, and sacrifice our personal interests for the sake of the national interests, to ensure that the Nation, the Religion, and the Monarchy will be safe".

He continued, "No one will win if they keep fighting each other like this. We will all be in trouble. That is why we must find the solution, either by legal or special ways".

Gen. Prayuth did not elaborate on his comments, and his words are bound to be interpreted by pro-government critics as a tacit threat to launch a military coup against the government of Prime Minister Yingluck Shinawatra; Gen. Prayuth has previously refused to rule out a possibility of a coup.

When asked about anti-government protesters' call for the army to "disobey" Ms. Yingluck and turn against her, Gen. Prayuth went silent for a while before replying that he could not provide an answer because it was a difficult question.

"Suppose you work in a company, and you decide to protest against the company owner," Gen. Prayuth asked the reporter instead, "Can you do that? If you don't agree with your supervisor, do you dare fire that person? If not, then you must do your duty. Whatever duty has been entrusted to you, you must do accordingly".

"I will not overtly criticise anyone, because I have to keep my status, so that I can work in every job," Gen. Prayuth insisted.

He similarly refused to say whether he agrees with the anti-government protesters' demand that Ms. Yingluck be replaced by an appointed Prime Minister, saying that he cannot side with either opinion.

When a reporter asked about the upcoming mass rally by the pro-government Redshirts on 5 April, Gen. Prayuth said things would be well if the demonstrators respect the laws, and he stressed that there is no plan to declare the martial laws to contain the protests.

The army chief also urged the anti-government protesters to refrain from any violent retaliation after their motorised convoy came under gunfire attack on the expressway yesterday.

"If the protesters spot the perpetrator, they should immediately inform the police," Gen. Prayuth, "Don't use any force in retaliation".