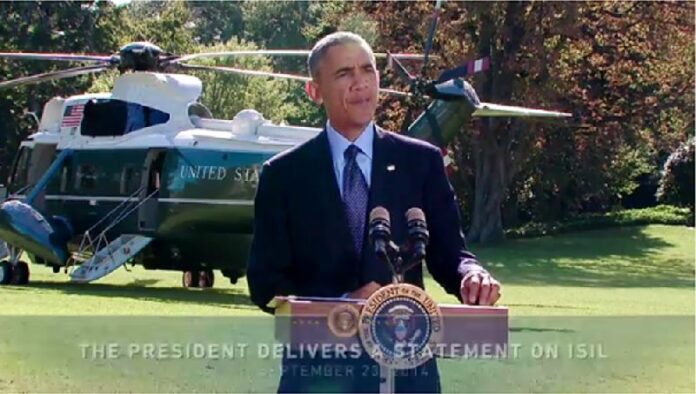 23 September 2014, President Barack Obama ordered American armed forces to begin targeted airstrikes against ISIL targets in Syria. Speaking from the White House South Lawn today, the President made it clear that these strikes are part of the U.S. campaign to deliver one message on ISIL: They will find no safe-haven.

The U.S. military actions also included strikes to disrupt plotting against the U.S. and our allies by the Khorasan Group — seasoned al Qaeda operatives in Syria.

The people and governments of the Middle East are rejecting ISIL, and standing up for the peace and security that the people of the world deserve. Not since the Gulf War has the United States been joined in direct military action by such a broad coalition of Arab partners. Meanwhile, we will move forward with our plan – supported by bipartisan majorities in Congress – to ramp up our effort to train and equip the Syrian opposition, who are the best counter-weight to ISIL and the Assad regime.

Over 40 nations have offered to take part in our comprehensive plan to degrade and destroy ISIL: "to take out terrorist targets; to train and equip Iraqi and Syrian opposition fighters who are going up against ISIL on the ground; to cut off ISIL’s financing; to counter its hateful ideology; and to stop the flow of fighters into and out of the region," he said.

The President once again thanked Congress for taking a bipartisan stand against ISIL:

America is always stronger when we stand united. And that unity sends a powerful message to the world that we will do what is necessary to defend our country. Over the next several days, I will be meeting Prime Minister Abadi of Iraq and with friends and allies at the United Nations to continue building support for the coalition that is confronting this profound threat to peace security. This overall effort will take time. There are challenges ahead. But we’re going to do what is necessary to take the fight to this terrorist group – for the security of our country, the region, and the entire world.