BANGKOK — Oh, beauty pageants. Times change; they don’t. Some commercial interest trots out a teenager in a tight gown and bikini to answer questions on the state of world affairs, banking on a sparkling display of wit under pressure.

Asked whether the enduring pageant format makes a lick of sense, Anea Garcia, the 20-year-old Dominican-American tower of bae crowned Miss Grand International on Sunday in Bangkok, said, as she must, it’s to test inner and outer beauty, while those Q&A segments are there to gauge intelligence. It’s not just Garcia; most contestants by virtue of their position would never dare say there’s anything wrong with this – that’s just how it’s always been. Like how Playboy will forever include nude pics.

The world has changed. Meanwhile so-called “beauty” pageants now demand their willing contestant-victims spill forth inhuman levels of "authentic humanity" in a thin attempt to wash out all the dehumanizing rest of it.

Anea Garcia, at right, in a promotional image for Miss USA 2015

Just three months ago Garcia was competing for Miss USA and flubbed one of those vapid questions difficult to answer in an hour, let alone a few allotted seconds.

“Do you think political correctness is hurting or helping our culture and why?"

She wasn’t able to answer, but still walked away second runner-up, which is pageant-speak for third place. Online and in the press, commentators wringed their hands about how this screw-up would be hard for her to shake.

Fast-forward to this past Sunday and all was forgotten at Indoor Huamark Stadium when Garcia stunned the audience by saying she was a child of rape. At 13, she said, her mother was raped by her father, which led to her being adopted by her grandmother. The crowd had tears in their eyes.

“We all commit sins, but that doesn’t mean that person has to be banished,” she said in an interview Tuesday.

All due respect to Garcia and her story. But what kind of emotional vampires are we to feast on such disclosure at an event that’s otherwise Prozac-placid smiles and chiffon-fringed fantasy?

While honesty, hardship and humanity such as Garcia’s can help win a crown, what’s left unsaid is that beauty pageants, in the same sadist bent of reality shows, still knock a fully realized woman down to one dimension.

Kanittha "Mint" Pasaeng of Miss Uncensored News Thailand was recently caught in such a predicament. When rumors spread she was to lose her crown for fibbing about her education, the nation rallied to her defense for one image: In tiara and sash, Mint prostrate before her mother like she was Mecca, giving a wai to her surrounded by the trash cans which spoke to her humble-humble origins. 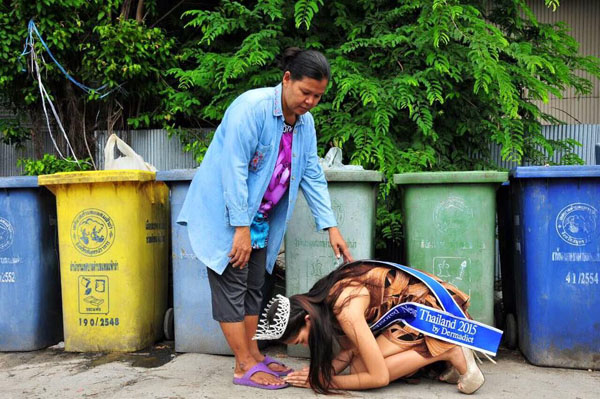 Now, Mint may possibly be the coolest, most self-actualized young woman in Thailand. Regardless of whether she hammed it up for the camera, the problem is with us – not her.

Either way, we'll probably never see her with garbage again.

Now, after you’ve opened a vein and spilled out your humanity for “Q&A,” it’s time to shut up and pretend you don’t have a brain.

Also making the media rounds Monday with Garcia was Rattikorn “Pormai” Kunsom, 20, fourth runner-up of Miss Grand. She said her big influence was Aung San Suu Kyi, and was immediately criticized for not mentioning the monarchy or influential figures closer to home.

“I just wanted to avoid sensitive subjects on politics,” side-stepped Rattikorn, instead of confidently holding her ground and explaining why she chose an insurgent heroine who defied a dictatorship. Perhaps understandably so, in a pageant world where anything you say can and will be used against your reign.

So how does she plan to follow her role model’s footsteps to fight for freedom in Thailand? She doesn’t.

Pormai said she aspires to star in lakorn as nang-ek, or leading lady. The ones whose character arcs usually consist of learning to love the man who raped her. Even with a mildly more interesting role, her future will consist of responding to mind-numbing questions from reporters interested in her latest TV break-up.

Way to throw that hard-won degree in Industrial Physics and medical instrumentation in the bin.

Beside a determination to spread peace and unity through the world, pageant contestants need to have a squeaky-clean image. Anything less and cue the tut-tuts and slut-shaming. Contestants, like Korean pop stars, aren’t allowed romance in any form. No boyfriend; no spouse. One sexuality-positive – or just plain raunchy – image posted online, and you’re out.

None of this resembles the 21st century that I live in. Nor do I think it says a damn thing about beauty, inner or outer. So ladies, instead of grimacing into that tight dress and pretending to be something else, why not throw that crown away, and finally, start being yourself?