Home Arts & Culture Despite Some Flaws, River Bridge Park is a Good Step to Greener... 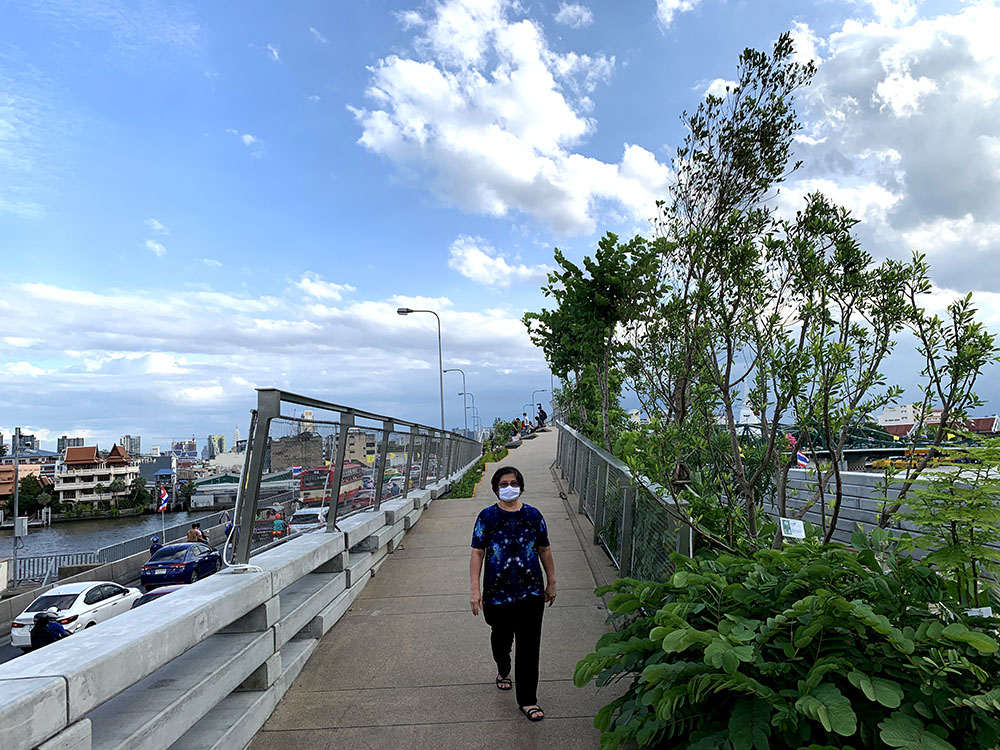 BANGKOK — The newly opened Chao Phraya Sky Park is a welcoming addition to the scarce green space in Bangkok. At the park, converted from a bridge, visitors can walk a 280 meters stretch to cross the river on a modest naturalistic garden path.

Built by the Bangkok Metropolitan Administration, its most significant drawback is the fact that the green bridge is flanked by the Rama VII motorized bridge on both sides, thus park strollers will have to be content with vehicular noise and car pollution.

The park itself was built on a bridge originally meant for a skytrain rail line back in 1984. The project never materialized and the site was left abandoned.

If one can put up with these fundamentally negative aspects of Chao Phraya Sky Park or choose an appropriate timing to visit then it’s really enjoyable. Visitors can make use of the park bridge early in the morning, the evening, or during the weekends, when there are fewer cars passing by.

When we visited the 22,400 square meters park on a late afternoon Wednesday, over two dozen people were already at the park which was opened late last month.

Kraiwit Tabkong, a Bangkokian from the On Nut area, was sitting on one of the many concrete seating steps with a friend, enjoying the southern views of the river. Kraiwit said it was his first visit to any public park in a very long while, as he spent more time inside some of Bangkok’s numerous air conditioned malls.

He said he will revisit the sky park again and gave the park a score of 7 out of 10; Kraiwit suggested officials put up more roofs to shade people from the rain.

The park may be too short in length for serious joggers but one can always continue jogging on either banks, be it the Bangkok or Thonburi side of the capital. It’s ideal for those wanting to engage in a relaxing stroll and sit down to enjoy the views over the river.

Particularly charming is the views of the Temple of Dawn and the nearby Memorial Bridge as well as Kanlayanamit Temple and Santa Cruz Church on the northwest side of the bridge at sunset.

Elderly users as well as children should be careful as some uneven areas marked by bright yellow could cause injuries. Some walkways have no fences.

Although the bridge claims to have universal access for wheelchair users, the lift on the Thonburi side of the park was not functional as of Wednesday evening.

Such negligence to accommodate wheelchair users seems to be a culture among the City Hall officials, who also failed to build elevators in many BTS stations despite a court order to do so.

On both ends of the bridge, there are interesting historical and tourist sites that one can visit on foot.

On the Bangkok side of the bridge, it’s a 15-minute walking distance from Little India and 20 minutes from Chinatown. On the Thon Buri side of the bridge, Khlong San district with old houses, temples, quality street foods and cafes as well as artsy places like the Jam Factory is also a manageable 20 minute walk away.

Visitors may sense some similarities with the much longer and more famous elevated park, The High Line in New York’s Manhattan, for a similar narrow but modern path filled with shrubs, green borders and small trees.

Both are planted in naturalistic style and combined with modern hard geometric landscape and stainless steel rails. Both are elevated and built on an old railway.

But while the High Line in Manhattan is 2.3 kilometers long, it doesn’t cross any river, unlike Bangkok’s first pedestrian bridge-park, so perhaps it does have something unique to offer.

One day, when the BMA has enough cash or could raise enough funds, a proper pedestrian park bridge across the river and far from any cars and vehicular noise would be a most welcoming addition to the capital.

Chao Phraya Sky Park is open daily from 5am to 8pm and entrance is free. Visitors are currently required to wear sanitary masks to prevent coronavirus infections. The park is near Memorial Bridge Pier and 800 meters from Sanam Chai MRT Station.