BANGKOK — Collected rainwater freshens a kitchen garden full of curry leaves and mint, harvested by migrant employee hands just before dinner. The herbs will be used to season the courses of a fine dining menu, as well as food packages for the destitute.

Any food waste scraps are made into compost or fish food for the sea bass that will grow to become next season’s menu – and the cycle begins anew.

Such is the philosophy of sustainability at Haoma, a neo-Indian fine-dining restaurant that’s on a different spiritual plane due to owner Deepankar “DK” Khosla, who’s been running the venue for three years. But like any other earthly establishment, Haoma slammed into the same wall of COVID-19.

During the months from April to June when many businesses were ordered shut – including dine-in services – Khosla decided to turn the fine-dining restaurant into a “temple kitchen” where his staff could get unlimited rations of food as they prepped free meals for the homeless and poor. Since the lockdown measures were imposed, they’ve handed out 100,000 meals.

Why did he do it?

“The blood in my veins, and all the veins of all Thai chefs are red,” Khosla replied. “The air we breathe, the water we drink is not from Thailand or India, but from Mother Earth. If anyone is hungry, we can provide for each other.”

‘You Cannot Cheat With Nature’

For the god-fearing Hindu – Khosla has an arm tattoo of Ganesha and at the entrance of his restaurant – having a green kitchen garden for fresh herbs and keeping his team together during the pandemic are both in-line with his philosophy of sustainability.

“During lockdown, we have not sacked one person, not deducted 1 baht,” Khosla said. “Before the shutdown we had 24 staff. Today we have 24 staff,” he said.

It’s especially important for his team, which include Thais as well as Myanmar and Cambodian migrant workers, to keep their jobs since many of their family members lost theirs during the pandemic.

“They still have their jobs, but their wives are maids or work in the hotel. And they all lost their jobs. Suddenly, with four people earning money for the family, it’s one,” he said.

Instead of having fifty extra seats for the restaurant, Haoma has a garden filled with more than 40 species of plants and herbs for fresh use. He bridled at the notion that “sustainability” is some sort of a cliche marketing buzzword.

“Sustainability is not just about nature. It’s the sustainability of mankind, of your team. It’s not a marketing gimmick,” Khosla said. “You cannot cheat with nature.”

Although Haoma is strangely absent from the pages of the Michelin Guide (“Maybe we’re not cool enough,” Khosla said), but has a three-star certification from Food Made Good, a UK company that certifies sustainable restaurants.

Diners are presented with glasses of filtered rainwater – other fine-dining places in the city will slap you a hefty bill for an Evian, Perrier, or San Pellegrino.

More than a third of the restaurant’s electricity is solar-powered, while the harvested rainwater is used to water plants such as sorrel and Indian borage. A group of sea bass are growing in tanks in the back. All of the restaurant’s produce are sourced locally: either their garden here, their 3-rai farm in Chiang Mai, or Khlong Toei Market.

“If you get a slice of imported wagyu with some salt on it, the cow did all the work to make it taste good. If you get a cracker with four fucking pieces of uni on it, you’re just the middleman between the ocean and [the customer,]” he said. “We get these vegetables and we work our balls off to make them taste good. It’s all technique.” “Haoma” is named after a divine plant and the elixir of life made from it in Zoroastrian and Hindu tradition. Having a hard time imagining it? That gigantic sculpture in Suvarnabhumi Airport depicts angels and demons tugging a Naga between them in a bid to extract the immortal nectar.

One dish that summarizes Haoma’s mission is the “Samudri Rassa” or “Dying Oceans” dish in the non-vegetarian menu that raises awareness for the oil spills of 2020. A lobster sits in a black seafood bisque, delicately strangled on top by a “net” made of sweet potato strands and a transparent, paper-thin piece of potato starch to represent plastic waste.

Luchi bread and salan peanut sauce with chilies are just some of the Vedic food that reappears in Haoma in modern form. The bread becomes a cracker topped with nilgiri qorma stew but made into green bubbles, while the peanut sauce is served with the same biryani rice that Khosla gives out to the homeless. Usually the Haoma team gives out a dish of biryani due to its similarity to khao mok, or Thai biryani rice with chicken – the same one served in the fine dining menu. “You never know which homeless man will leave a Trip Advisor review,” he said, laughing.

“Sustainability doesn’t mean the food is not delicious.  We don’t compromise on flavors or presentation,” Khosla said, and neither are compromised at all in the 10 course menus, 2,796 baht for both the non-vegetarian and plant-based dishes.

“In a city where Gaggan can take Indian food to the fusion level, I want to shift it to honest, unplagiarized, non-Westernized cuisine. I want to rediscover Indian cuisine for the Thai palate,” he said.

Indeed, Haoma’s tastes and textures and many of the dishes are unlike any other experience of Indian (or Indian-inspired) food one might have had in Bangkok – no greasy, milky Butter Chickens or Chicken Tikka Masalas here. “What we know today is Indian cuisine that has been bastardized by colonial powers, the British, French, Portuguese, Dutch. It’s not the classic cuisine of India.”

Haoma focuses on finding the taste of pre-colonial India – there’s 3,500 years of Indian culinary heritage to draw from – and presenting it in a modern way. Or, as he said it, his grandma should be able to eat it and say that it’s real indian, but his presentation is on par with any top restaurant in the world. Next time you’re at Haoma, chat him up about Vedic cuisine or his hometown of Allahabad in central India. Khosla’s grandfather moved there from Kashmir after answering Mahatma Gandhi’s call, making his area the confluence of cuisines from all over India. 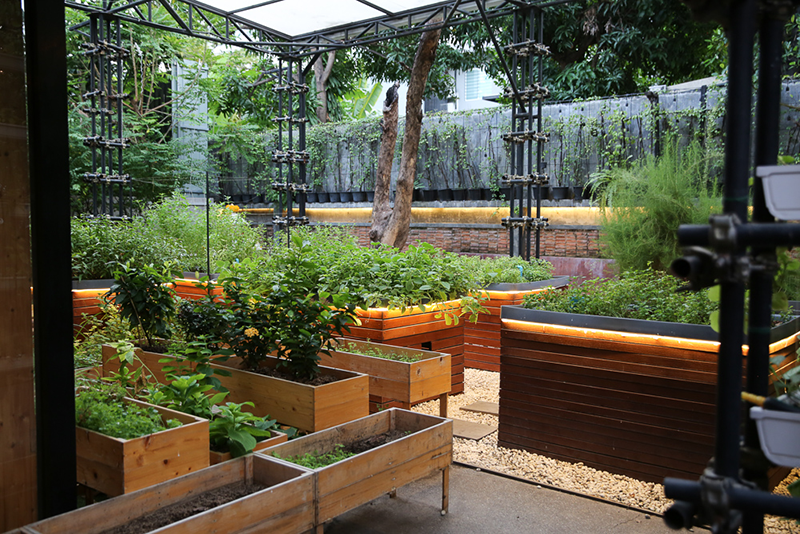 Cooking up Kindness: The Eateries Who Offer Free Meals to Migrant Workers