BANGKOK — An American-Ecuadorian woman darts between racks of clothes, suggesting a white blouse to one woman and a loud patterned dress to another.

Dozens of women attended a clothing-swap event organized by Swap ‘Till You Drop! on Monday night to trade their clothes in defiance of fashion fashion and in the name of eco-consciousness instead. Perks included dozens of new wardrobe items for next to nothing and free-flow sangria in a sleepover-like atmosphere.

“You can wear this dress backwards, so the neckline is conservative for Thailand, but you got sexyback,” Carla Rivera said as she tried on a tie-front yellow dress backwards.

The Swap ‘Til You Drop! team, led by American expats Rivera and Jessica Teal, have been holding clothing swaps for five years. They started in Teal’s home before expanding to The Home BKK co-working space, which Rivera founded.

As part of their Fashion Revolution Week which begins Monday, the team will organize two more swaps: one on Tuesday at WeWork and another on Saturday at Model Market. The week also offers talks and free seminars about green fashion. Fast fashion is a leading source of waste in Thailand – almost half of all Thai shoppers toss their clothes after one wear, some after never wearing them at all.

“One of the biggest sources of waste in the world is fashion. And as women, we have so many clothes,” Teal said. “And I love seeing the social aspect of it. Seeing people compliment each other, like, wow! You look great! That used to be mine! It’s like seeing Christmas all over again.” Rivera, 39, a designer by trade at Soledad Designs, says she loves to give tips on how to revamp outdated pieces – a skirt out of a dress, pants into a jacket.

“If it doesn’t fit one way, we can find an alternative,” she said, wearing a miniskirt as a crop top. Rivera says she hasn’t bought any new clothes (other than necessities like underwear) since 2014.

Newbies to swaps may fear closet throw-outs of 00’s fashion, but attendees – mostly expat women – say they all managed to get good finds.

One regular is Madeleine Recknagel, a 43-year-old German who blogs about her zero-waste lifestyle on The Sustainable Self blog. Seeing the beach at Koh Phangan full of waste three years ago was a wake-up call for her to start living conscientiously.

“We spend so much money and time buying, storing and taking care of things that we forget to live,” she said. “Look in your closet. How much do you actually wear? I would rather buy locally-sourced things that support locals so they can send their kids to school, rather than five people at the top of a large enterprise.”

Fast fashion also drains wallets – she says she’s saved more than 300,000 baht since she started this lifestyle. The swaps are her main source of clothing, but that’s not the best thing she’s gotten from the events. “I love the community and friendships. It’s why I keep returning,” she said. “I’ve also gotten lovely pieces I wouldn’t find in a mall. People here have travelled from all over the world, so I’ve gotten some pieces from Sri Lanka, Japan and so on.”

Attendees quickly try on clothes in a room at the back, asking for tips from friends-to-be – much like trying out outfits at a girlfriend’s house. Seeing someone take home a dress you brought along gives a thrill of satisfaction.

Fashion Revolution Week events are open to all, except the clothing swaps which are women-only. Follow Swap ‘Till You Drop! for their swaps, with occur every month or two and are usually held at The Home BKK, a walkable distance from MRT Sukhumvit or BTS Asok. Tuesday’s swap is at WeWork Asia Centre on Sathorn Road, a short walk from BTS Chong Nonsi, and Saturday’s is at Model Market BKK, reachable from BTS Thong Lo. 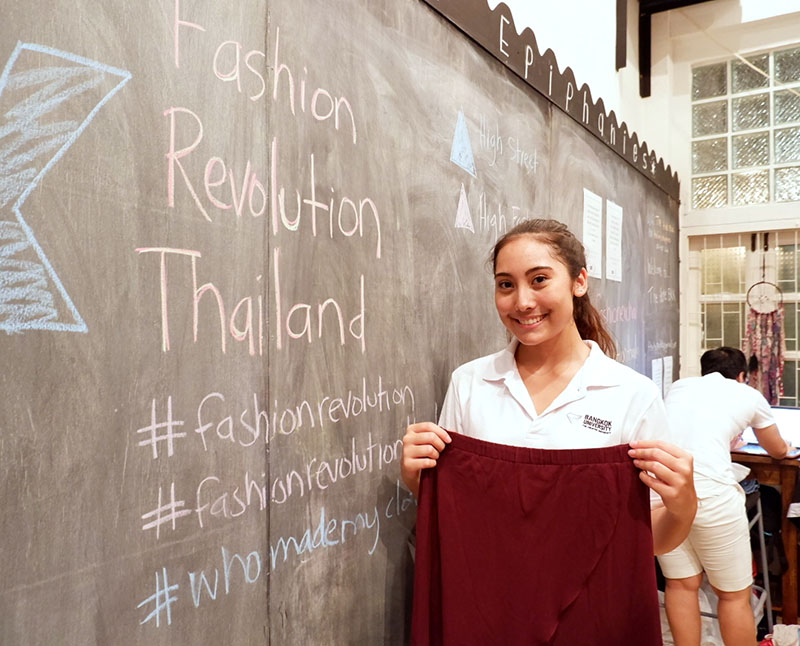