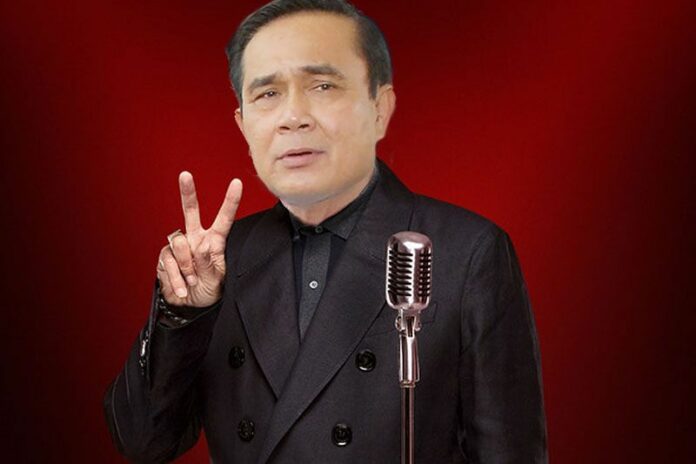 BANGKOK— General Prayuth Chan-ocha released on Wednesday his new single, “Bridge,” filled with metaphors of romantic reconciliation and refrains from his older tunes.

Prayuth released “Bridge,” a new song he had penned to encourage government workers in the coming year, Wednesday morning at the Government House.

Not only is the junta leader famous for initiating Workout Wednesdays for government workers and overthrowing the elected government, but also for being a self-published master songsmith.

One of his most recognizable singles is “Returning Happiness to the People,” the chorus of which is included in “Bridge” as a nostalgic refrain. Prayuth also wrote a New Year present for Thais in December 2015, with “Because You’re Thailand.“ Most recently he released “Hope and Faith” in October to cheer Thais up after the death of King Rama IX.

“Bridge” is set to piano and keyboard backing, and even includes harmonizing lyrics pulled from “Returning Happiness to the People” for a nostalgic punch in the gut.

Here’s our unofficial translation of “Bridge.”

(Verse 1) It might’ve been a while since I’ve been fighting for you,
The land I love so strongly.
However long it is, I persevere in heart,
When I face a rapid river, great obstacles,
How do I get you through tragedies?

(Bridge) Don’t lose heart, because I never give up,
My two hands won’t let you go,
Don’t be shaken, I’m asking you.

(Verse 2) What I promised on that day,
I’ve been fighting for it with my heart,
Every time I fall, I get up again,
I was born to live for you, my treasured land,
I’ll repay you and fight for you until I die.

We will do what we promised,
We are asking for a little more time,
And the beautiful land will return, woah!
(Singing overlapping with chorus.)

That day isn’t far off,
What we dreamed of will come true.