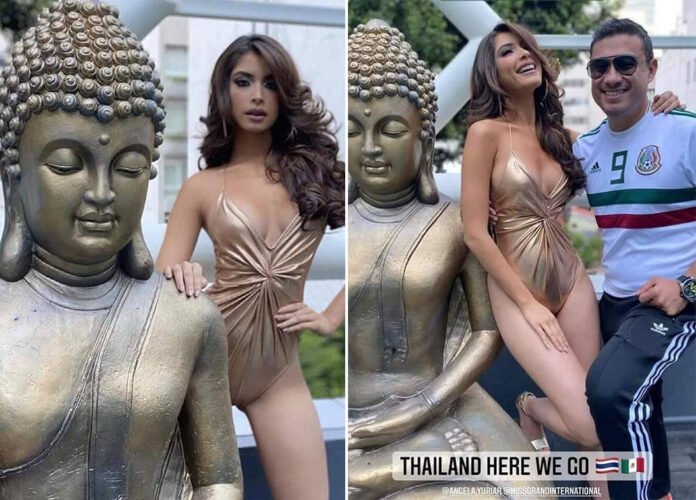 BANGKOK — Some of the devout Buddhists on Monday are finding fault with a Mexican beauty queen who took photos and a video of her in a swimsuit next to a Buddha image.

Miss Grand Mexico Angela Yuriar, 19, posted the video on Sunday with the caption, “Thailand here we go,” though she later deleted it. Yuriar is set to attend The Miss Grand International 2020 pageant in Bangkok next month.

“Due to her ignorance of Buddhist culture, she wore a swimsuit and took photos with the Buddha image, creating a scandal about decorum and religious sensitivity,” Beng Nang Ngam, a beauty pageant fanpage, wrote online.

“Due to her lack of understanding about religion, I think she has to come out and say something. But still sending her our support!”

Hardline Buddhist groups have often expressed outrage against foreigners using the sacred image of the Buddha as kitschy souvenirs, tattoos, or decorative items. A well-funded campaign, called Knowing Buddha, also urges tourists not to buy Buddha images to be used back home as decorations.

“In her country, it might be normal, but here it’s very inappropriate. I saw that once they used the Buddha’s head to make an ashtray. We have to explain to them and they will understand,” Facebook user Here Nat wrote in a comment under a news article.

However, some pointed out that according to Buddhist teachings, the Buddha himself had asked his followers not to worship him or turn him into an idolatry image.

“If we go back in time and tattle to the Buddha, he wouldn’t be angry,” user Chetsada Thamchaikul wrote in a comment. “He rejected worshiping the image. His representation is the Dhamma. We are the ones who created such rituals to worship the person instead of his teachings.”

The 8th edition of the Miss Grand International pageant will take place at Show DC in Bangkok on March 27. It was supposed to be held last year, but postponed due to the coronavirus pandemic. The contestants are expected to start arriving in Bangkok on Feb. 28.

The current titleholder of the Thailand-based franchise is Valentine Figuera of Venezuela. Thailand’s representative in the pageant is Patcharaporn “Nam” Chantarapadit.