These are only a few side effects of the inordinate heat currently smothering Thailand. At least four deaths, all outside of Bangkok, have been attributed to heat-related causes this summer.

Expect to see lows of 27C and highs of 40C in Bangkok through Friday. Highs should drop to 38C during the weekend. The rest of the country should see similar patterns, except for the north which should brace for 42C highs. Inordinately hot sea water is bleaching coral in the Surin Islands archipelago white. On Koh Torinla, 80 percent of the coral is now bleached, according to Songtum Suksawang, director of the national parks department. Sea water temperatures have risen to 31C, higher than the optimum range of 23C to 29C. 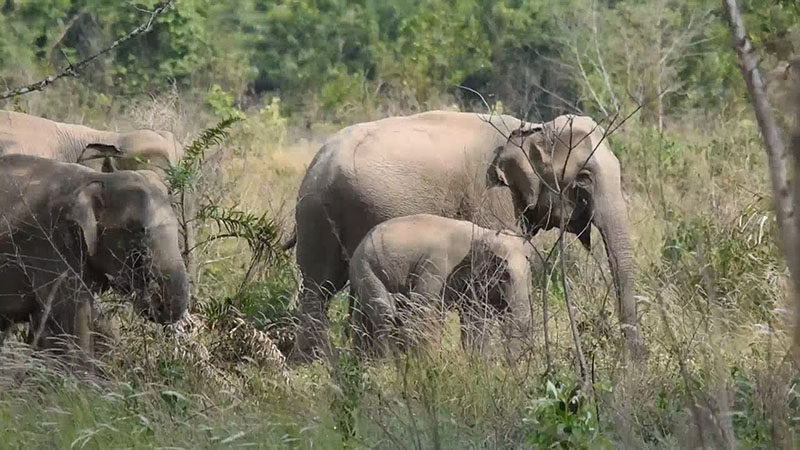 Residents near the Khao Ang Ruenai Wildlife Sanctuary in Chanthaburi were surprised Monday to see at least 30 elephants migrate into residential neighborhoods. Wildlife officials say the migration is due to the elephants being unable to find water sources in the wild. Both Thais and foreigners in Nakhon Ratchasima are cooling off on weekends at local waterways, especially Wang Neng Waterfall. “It’s so hot, I don’t want to go anywhere. If I turn on the aircon, the electricity bill shoots up, so I can’t save money. It’s like living in an oven,” Rengrop Bookkhuntod, a tourist from Korat said. “That’s why during the weekends I come with my neighbors and their kids to splash around here, only 40 kilometers from the city.” According to the agriculture department in Phayao, the province’s lychee season this year will produce 4,900 tons of lychees — a 50 percent drop from last year. Nawin Inthajorn, a farmer in Phayao province, said the inordinate heat has resulted in trees producing less fruit. Northern provinces were listed as one of the hottest places on earth in late April. Pramoj Seniwong, 52, a coconut water vendor in Sriracha district, Chonburi, boasts that the heat is helping him to sell 3,000 baht in coconut products a day.

More Storms to Batter North After 2 Killed in Freak Weather