BANGKOK — Gentle and down-to-earth, Dominic Puwasawat Chakrabongse is the full-time environmental activist behind Precious Plastic Bangkok, a volunteer-run initiative that collects bottle caps from all over Bangkok before shredding and melting them into new products.

“We want to change people’s perceptions of plastic waste, and show that it can be more than trash that lies on the street or enters rivers. It’s actually an incredibly valuable resource,” Dominic says, moulding a tube of melted plastic.

Dominic, 28, decided in July 2018 to open the Bangkok branch of Precious Plastic, a worldwide project started by Dave Hakkens in the Netherlands in 2013. Hakkens posted open-source blueprints of machines that can grind, melt, shape and compress plastic bottle caps for conversion into other products.

Plastic bottle caps are made of high density polyethylene (HTPE), a type of plastic that does not burn even at temperatures of 180C. This makes them suitable for being melted and reshaped.

Much of the bottle caps Dominic gets are blue, since a lot of water bottle caps are shades of cyan and navy – in the garage he separates them by color.

After one machine shreds the caps, another melts the plastic into a moldable cylinder. It takes around 150 caps to make one bowl. Another branch of Precious Plastic in Chiang Mai, run by Bope Shop, has a machine that presses plastic shreds into coasters and other flat products. Precious Plastic is looking for designers they can work with to produce even more aesthetic pieces. A trip to the beach, and the knowledge that Thailand is one of the world’s largest plastic polluters, convinced Dominic to dedicate his time to helping Thais go green.

“Every single step, I saw plastic and then another piece and another piece. When you start noticing it, it’s even worse,” Dominic said. “How can we keep going on like this?”

After completing a degree in environmental policy from the London School of Economics, Dominic settled on his approach to recycling – which is far from asking people to separate their waste into seven different categories.

“I’m not trying to make big, sweeping changes. These are small changes that anyone can do, even if it’s once a week. If you push overwhelming changes onto people, they will reject them,” he said. Dominic understood that getting Thais to start recycling has to begin with an easy, accessible option – like twisting off the cap of your single-use green tea bottle and tossing it into a box.

“We need a simple and cheap solution. Lots of communities are held back from recycling because it’s more expensive to properly deal with waste,” Dominic said.

That, as well as governmental delays in tackling legislation, are the main obstacles that prevent Thais from recycling.

Precious Plastic Bangkok has recycled around 100 kilograms of bottle caps, sourced from donations and from trash-collecting volunteer groups such as Trash Hero. The group even put together a Bangkok Design Week display in January. Dominic recently received one of his biggest orders yet, from a corporation who wants 250 plant pots which will require 20,000 bottle caps. “This model is really good for communities. The raw material is completely free and the machines are very rudimentary, easy to bolt and weld together. I hope to see Precious Plastic chapters set up all over the country, in different neighborhoods and provinces,” he said.

“It’s only a drop in the ocean, but it’s a start in diverting plastic from the landfill,” Dominic says. “It shows that Thai people are keen to be a part of something.” To donate your plastic bottle caps, click here for a list of dropoff sites for your caps, which include vegan cafe Broccoli Revolution and Better Moon Refill Station. Alternatively, you can mail your bottle caps directly to:

Precious Plastic Bangkok sells plant pots and bowls for 150 baht to 250 baht. Bope Workshop sells coasters for 120 baht each. Both are available from the River Books Shop located in the Chakrabongse Villa, in the old town area near the Grand Palace. 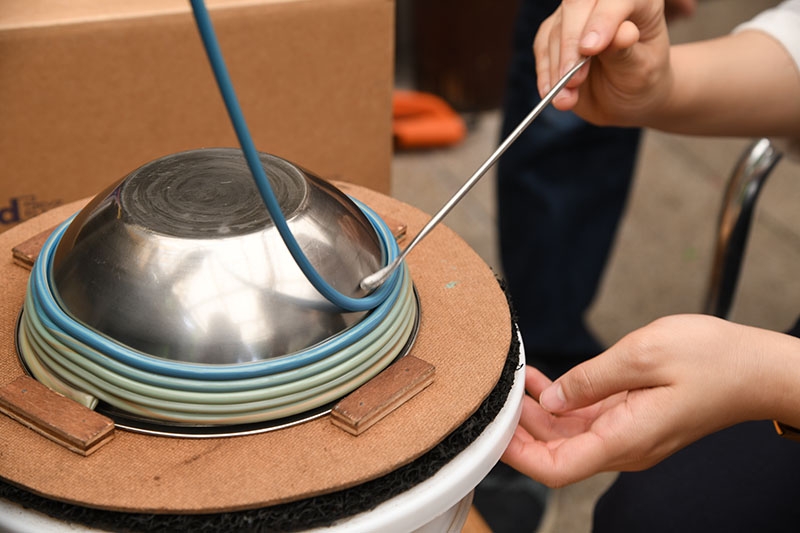