BANGKOK — What could be the only Russian restaurant in Bangkok with a real Russian chef has opened with a surprisingly affordable menu.

The Moon Under Water is a tiny, approachable Russian restaurant on the second floor of a taam-sang eatery in Phra Khanong by chef Alesha Voronin, who also wants to offer his kitchen as a video production studio.

“For people who know this food, they were crying when eating it because they said it was like their mom or their granny’s cooking,” Voronin said gustily, talking about the Russian expats who have come to memory-check his food.

Depending on availability Voronin may also offer homemade appetizers, or zakuski, such as pickles, salo or cured pork fat and jellied kholodets meat.

“It’s not really for profit. I would rather throw away leftover food to keep quality high and customers coming back,” he said.

The “family set” is a choice of pork cutlets or sausages with pickles and sauerkraut, but the taste of the sausages (220 baht) may be dense and bland to the Thai tongue.

His meats are sourced by Sloane’s and no MSG is used. The new restaurant has four dishes so far, but Voronin plans to keep changing the menu, including some “very Jewish” smoked fish and bagels and a lunch set under 300 baht.

As soon as he gets appropriate licensing, there will also be infused vodkas as well as homemade kombucha. For now, there are San Miguel draft beers, wines and Ukrainian herb teas (70 baht). During our hosted visit to try things, the available teas included calendula, sage and coltsfoot flowers.

The place seats only 10, and a party of 15 would fill the place.

Part of the 45sqm restaurant is the kitchen, which Voronin hopes will double as a production studio for people to film their culinary adventures. Voronin believes Bangkok is in sore need of an affordable professional kitchen production studio. “An agency could charge 100,000 [baht] and up for use of their studio. But I’m thinking I can set up a dolly here and charge 20,000 baht for facilities, equipment, shooting and editing. We can present a final product to them,” Voronin said.

Voronin, 34, has held events serving Russian rood and acted as a restaurant consultant before opening his place.

Voronin says that his is the the only authentic Russian eatery in Bangkok. Lebanese restaurant Bamboo in Nana doesn’t count – he says it doesn’t taste authentic and uses beef rather than pork, as well as Uzbek and Burmese chefs.

The name, Moon Under Water, comes from a George Orwell essay which details the writer’s 10 rules for the qualities of a perfect pub.

“A Russian restaurant doesn’t need to have some stupid name like ‘Matryoshka,’” Voronin said. “In tai chi, there’s also a move where you mediate and make motions like you’re lifting the moon out of the water. So I thought this is a name that would be meaningful to everyone.”

Voronin is fiery, colorful, full of stories and happy to engage patrons. Ask the nine-year expat about growing up with a moonshine-making mother on a farm on the Arctic Circle during the Soviet Era or his near-fatal backpack trip in Ranong province. 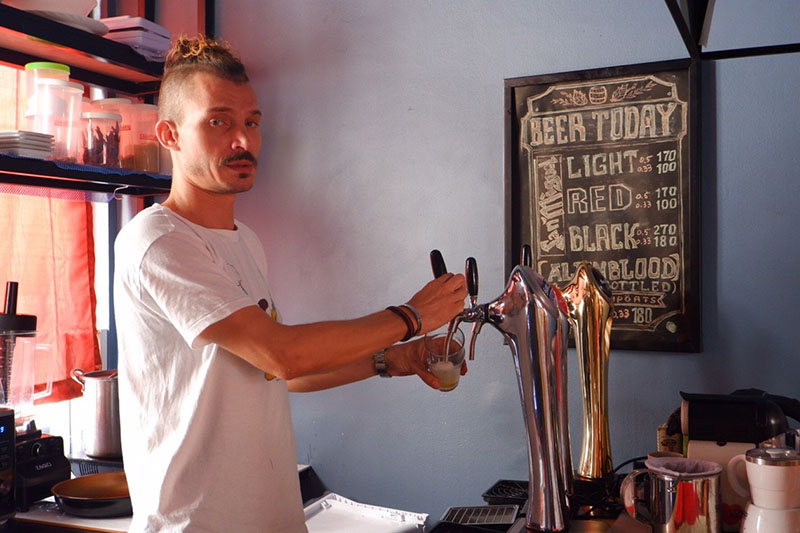 The Moon Under Water’s opening party is from 7pm onward on Thursday. The restaurant is reachable by a five- to 10-minute walk from BTS Phra Khanong. Its open 11am to 9pm daily, with closing time negotiable. This write-up is based on an unpaid visit. Feast Like a Tzar on Homemade Russian Food Next Week