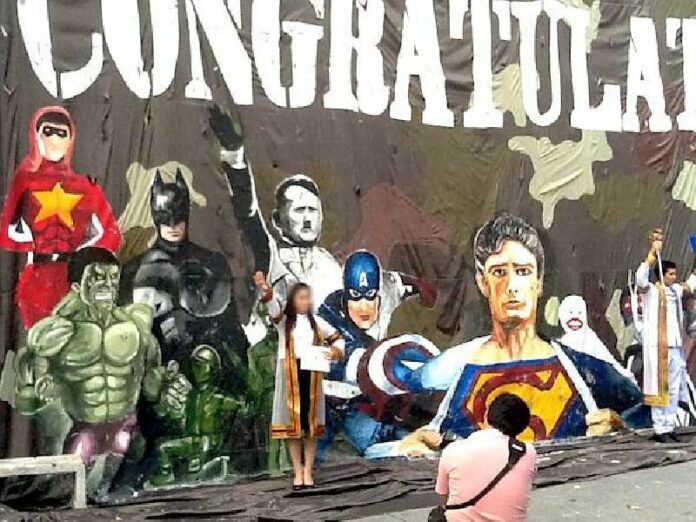 BANGKOK – Chulalongkorn University, the prestigious state university in central Bangkok, came under fire last week after a mural depicting the Nazi dictator Adolf Hitler among other comic superheroes, such as Batman and Superman, appeared at one of its buildings.

The mural, believed to be made by freshmen from the University’s Faculty of Fine and Applied Art, was displayed on the Faculty′s building during the graduation ceremony, with many newly graduates stopping by and taking photographs with the mural.

Some students were also seen performing the Nazi Salute “Sieg Heil” with the painting.

After the mural surfaced on the Internet – the website Coconuts Bangkok first reported about it – much criticism has been made, most notably by the Jewish community and news site “Times of Israel” which argued that depicting Hitler among the superheroes were unacceptable and disrespectful to the loss of the Jewish people during the Nazi regime.

Times of Israel later cited a statement by Rabbi Abraham Cooper, Associate Dean of the Jewish Organisation “Simon Wiesenthal”, expressing his outrage toward the mural.

“Hitler as a superhero? Is he an appropriate role model for Thailand′s younger generation— a genocidal hate monger who mass murdered Jews and Gypsies and who considered people of color as racially inferior?” Mr. Cooper was quoted as saying.

Noting that the mural was placed just right next to Faculty of Arts, which houses the History Major, Rabbi Cooper suggested that “Perhaps it’s time that the University arranges for its faculty and students to view it as part of an anti-genocide curriculum.”

Later,  Chulalongkron University of Communication Centre (CCC) also posted on their Facebook Page, expressing “deep regret” over the “offensive mural” on behalf of the University, the administration, and students of the Faculty of Fine Arts.

The letter stated that the university have given the students verbal warning and will make every effort to make sure that this kind of situation will never occur again.

Meanwhile, Asso.Prof. Suppakorn Disatapundhu, Dean of Faculty of Fine and Applied Art, Chulalongkorn University, has released an apology statement, citing that as he is in the position responsible for the Faculty, he would like to apologise to everybody affected by the mural.

He added that he has been considering the suggestion made by the Wiesenthal Center to add the modules on Modern History and Holocaust into the Faculty′s curriculum.

When Khaosod attempted to contact Mr. Suppakorn via his cellphone number, however, a woman has picked up the phone and informed our correspondent that the Faculty will not speak to any media agency and that the Faculty has already sent clarification letter to certain media and the Israeli Embassy in Bangkok.

Asked about the contents of the letter, the woman responded angrily that “I don?t have to tell you anything about it”.

Sources at the Faculty of Fine And Applied Art said Mr. Suppakorn has previously arranged an interview with the Associated Press, but later cancelled the appointment.

A student at the Faculty told our correspondent that Mr. Suppakorn has also instructed all students involved in the mural painting not to speak to any news agency. According to the student, who spoke on condition of anonymity, the dean has told the students any statement about the incident would be only released by the Faculty “to prevent any misunderstanding”.

According to the student, the senior students did not require Hitler to be in the painting, and one of the 1st year students simply added Hitler to the mural alongside other “superheroes”. Reportedly, no one made any protest to the mural, and it seems no one thought it was strange that the iconic dictator showed up in it, until the furore against the painting surfaced on the internet.

The incident appears to  highlight the fact that much of Thai population, even in one of the most prestigious universities of the kingdom, is oblivious to the atrocities committed by the Nazi regime.

Moreover, many Thais even embraced what some international media agencies terms “Nazi Chic”, the culture among young adults in Thailand and some other Asian nations that treated the Fuhrer as an icon of pop fashion. For example, T-shirts printed-screened with Mr. Hitler′s face or the Nazi swastika can be found abundantly in many stalls at Jatujak Market, the weekend market popular with forieng tourists.

Recently, a restaurant in Ubon Ratchathani province called “Hitler Fried Chicken”, which replaced the face of KFC′s Colonel Sanders with that of the German dictator. In response to this, spokesman from Yum, the parent company of KFC, told the Huffington Post, that “We find it extremely distasteful and are considering legal action since it is an infringement of our brand trademark and has nothing to do with us.”

In 2007, 200 Students from Thew Phai Ngarm School in Bangkok dressed up as Nazi Army in the parade. The school director later submitted apology letter the Simon Wiesenthal Organisation in response to the incident.

And again in 2011, students from Sacred Heart College, in Chiang Mai, have dressed in Nazi uniforms costumes for its Sports Day without knowing the true implications.

The latter incident raised much anger from the diplomats and foreigners, as the consulates of the United Kingdom, the United States, France and Germany visited the school and called for their responsibility to teach their students about modern history and the tragic genocide during the WWII.

Some Thai teachers at the school spoke to the press that they did not think the issue was serious.