Nearly two centuries of preserved Chinese way of life updated to contemporary expectations were on display at Lhong 1919, a commercial venue by the Chao Phraya River.

Walking around Lhong for the first time, one is reminded of The Jam Factory which is located nearby. There’s a bit of the Changchui vibe as well, without the artificial sense of being in someone’s expensive fantasy.

Take a tour led by some of the people behind the historic Chinese trading hub’s renovation and appreciate this is more than a new hip, photogenic hangout. There is a rich, Sino-Thai history going back 167 years here that can be found in its architecture and culture.

On the 6-rai complex, faded murals portray the Chinese way of life on building walls, doors and windows delicately restored by artists, while other details, such as teak window and door frames, received minor repairs or were left as-is to preserve the traces of history.

Saturday’s sizzling heat forced crowds to shelter under the U-shape buildings’ shades. Many stormed into a cafe for cool drinks and Thai desserts such as coconut pancakes. Prayers were offered in front of the Mazu Shrine located next to the central lawn while Chinese opera troupe Meng Por Pla rehearsed nearby.

Late afternoon gave way to a delightfully balmy evening as more visitors poured in, arriving by foot, car, taxi, motorbike or minibus. They were treated to concerts by dream pop act White Collar and indie trio Yellow Fang while shopping, eating and drinking.

As night fell, the Meng Por Pla crew took a stage for their Chinese opera, known locally as Ngiew, performance. The art form, usually confined to shrines and cultural theaters, was given a stage (although not a literal one) for regular audiences to marvel at.

Lhong was built in 1850, during the era of the King Rama IV, at a time when many Chinese immigrants were settling in Thailand, then Siam.

According to guides, that was the year the complex was turned over from the Bisalputra family to the renowned Wang Lee clan. Led by the Rujiraporn Wang Lee, Lhong 1919’s major restoration began in  October 2016.

Lhong 1919, on Chiang Mai Alley in Khlong San area, can be reached by motorbike or taxi from BTS Saphan Taksin or BTS Krung Thonburi. More information can be found on its Facebook page. 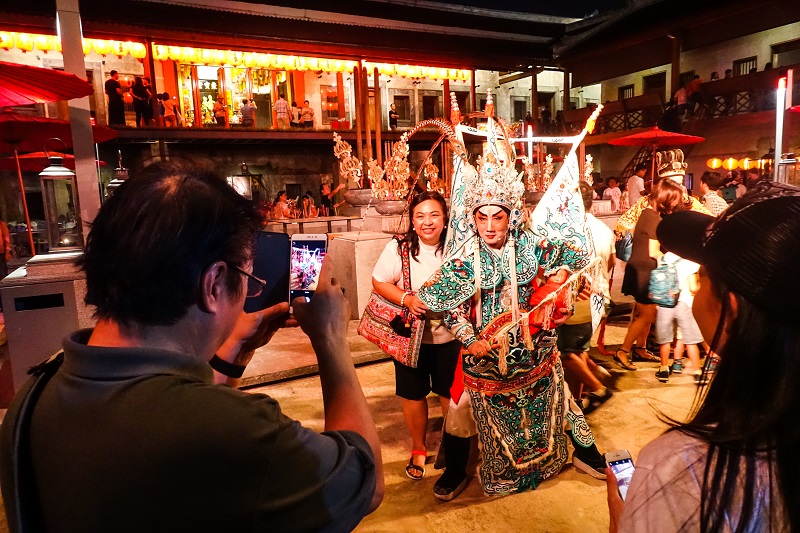