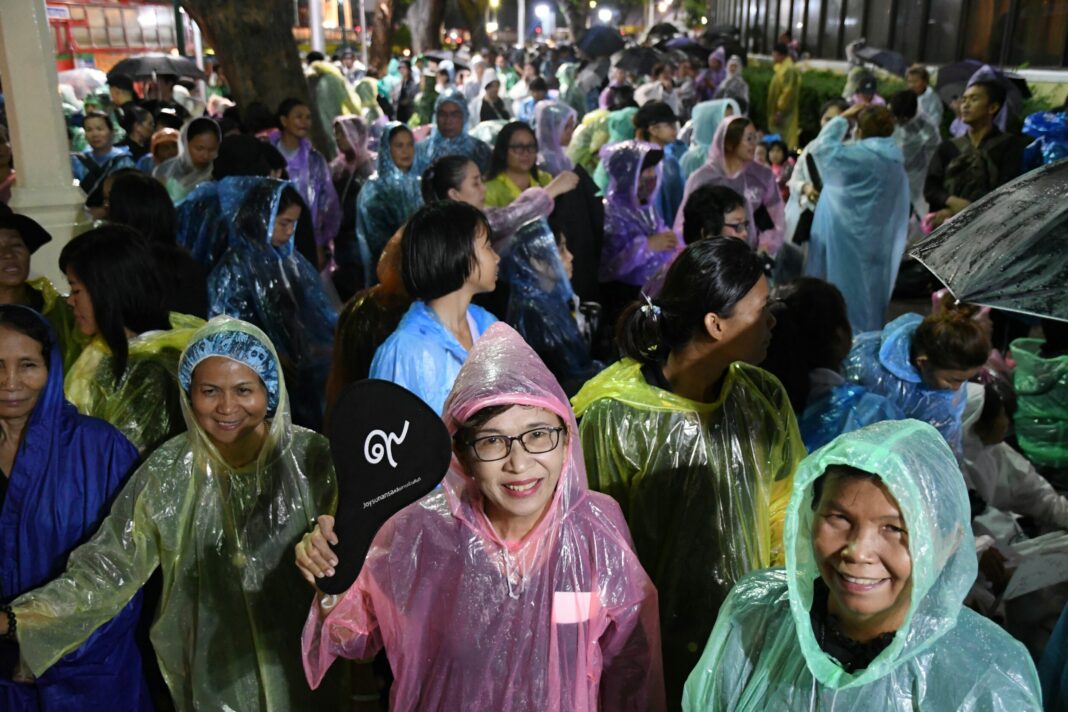 BANGKOK — After a long, wet night camping on the road, thousands of mourners were allowed into the Sanam Luang ceremony area early Wednesday morning.

Heavy rain and strong winds could not stop more mourners from queueing on nearby sidewalks in hope of getting a good vantage point to Thursday’s ceremony. At about 5am, they streamed in through nine checkpoints placed around the royal field. Those who were allowed inside will  have to spend another full day and night before the first procession gets underway at 7am tomorrow.

Some doors have already been shut as they reached their capacity, leaving thousands of people waiting outside, such as a checkpoint under the Phra Pin-klao Bridge which closed at 7am. A checkpoint near the Royal Ratanakosin Hotel near Ratchadamnoen Avenue was also sealed at 8am after 5,000 entered. As of 1pm, 110,000 people have already been allowed inside. All nine checkpoints were closed for authorities manage the crowds before they reopen at 8pm.

Attendees clutched portraits of King Bhumibol as they and their bags were searched. ID cards were required to register for access.

The main viewing area around the crematorium and adjacent streets was designed to accommodate 40,000 people, but the authorities Tuesday were looking to free up space for 70,000 spectators after King Vajiralongkorn asked them to facilitate more spectators.

Some people had traveled from afar and camped out on the sidewalk since Monday night to make sure they could secure the place to watch and pay final respect to King Bhumibol before cremation.

Army Commander Chalermchai Sittisart said Tuesday evening the king was concerned that the cement ground where mourners would have to sit all day would be hot, so he ordered to have it covered with heat-resistant mats.

The first procession starting at 7am tomorrow will transport the royal urn from the Dusit Maha Prasat Throne Hall to the crematorium. It will also be streamed in English on the official website and Facebook.