Inequality to some extent seems an inexorable law of civilization, present everywhere there is concrete. Some landscapes, though, paint a more graphic depiction of poverty than others.
Such is the case in Bangkok.

In 2019, Thailand floats in limbo between economically developed and developing. The World Bank cited Thailand’s distinctively brisk poverty reduction “from 67% in 1986 to 7.8% in 2017 (as measured by the upper-middle income class poverty line of $5.5/day)”. The positive upward trend, though, has not extended to the impoverished northeastern regions as much as to Bangkok. Another report from the World Bank notes that the “northeast accounted for roughly one-third of the total population in 2002, but its share of the poor had increased to three in five.”

What the economic trends feel like, translated into experience, is that Bangkok, with all its newfound riches, has left the rice farmers in the countryside – regarded by many as relics of the 20th century, behind in the rearview mirror.

Sang Jaan is an immigrant to the capital from Nakhon Ratchasima, a province in the impoverished rice-growing northeastern region of Thailand called Isaan. The average annual income for an Isaan Thai is a little more than USD$2,000, making it the most destitute region in Thailand by far. There is little advanced industry. The soil is poor and depleted from years of overfarming. Tourists do not visit the region in nearly the same numbers as they do the beach-laden South or the mountainous North. The education system of Isaan underperforms compared to the rest of the Kingdom. All of these factors combine to produce stagnant communities plagued by poverty and void of opportunity. 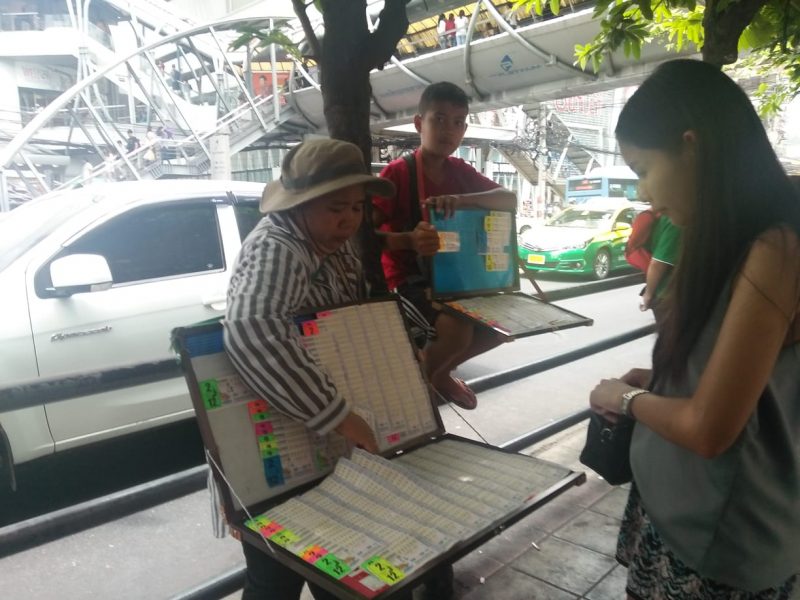 In search of a better life, Sang Jaan and her young son Thor, then two, migrated to Bangkok 10 years ago. Isaan migrants to Bangkok typically work jobs considered too low-skill or unprofitable by local Thais such as driving taxis, cleaning offices, sweeping streets or selling street wares. San Jaan and Thor, now 12, work together selling lottery tickets on the street near the major tourist hub Central World in downtown Bangkok for an income of what Sang Jaan says is usually around 10,000 baht (USD$300) a month.

I asked Thor if he goes to school. He smiled and said nothing.

Perhaps the most compelling thing about Bangkok poverty is the stark incongruity in the street panorama. People like Sang Jaan and Thor on the low-end of the economic ladder are widely visible in the loosely defined “Central Business District” – an amorphous area encompassing the multinational corporation-laden commercial heart of Bangkok. Porsches, Bugattis and Ferraris regularly pass labourers whose hand-to-mouth wages barely supply the necessities. Lesser status symbols like Mercedes-Benz cars are even more common. In fact, the automaker reported record sales of 15,785 units in Thailand in 2018.

Traffic shows off class divisions in high definition. In the inside lanes, for faster-moving traffic, late-market luxury cars speed along on their way to wherever. In the outside lanes, for slower-moving traffic, merchants push their wares, sometimes on foot and sometimes using small motorbikes. In one year, these people wouldn’t make enough to cover a single lease payment on the vehicles that pass them by.

Ubiquitous skyscrapers paint yet more contrast. Depending on the list, Bangkok ranks as high as #6 of cities with the most skyscrapers. Construction seems to never end. Development continues month on month, unabated. Even more prevalent than new buildings are advertisements for them. Luxury apartments are marketed as “elite” and “exclusive”. Triumphant families victorious in the financial war and well-dressed business executives peer down on the city from floor-to-ceiling windows on the 50th floor of some immaculate, new architectural wonder – in short, living the “good life”.

For the poor though, life seems to go on the same way no matter how many high-rise condos are built. Noon moved to Bangkok a year ago from Buriram, another Isaan province. Much like Sang Jaan, she came in search of a future better than the rice-growing one in her hometown. She sells ice-cream for a well-known local franchise, mostly to tourists, every day, without holidays.

“Did you know that the top 1% of Thais own 66% of the wealth?” I asked her. “No,” she said. Then she shrugged, seemingly unsurprised. It seems she already knew what I had told her, even without the cold hard ratios. The social gap is palpable in the streets, in the air, in the skyline.